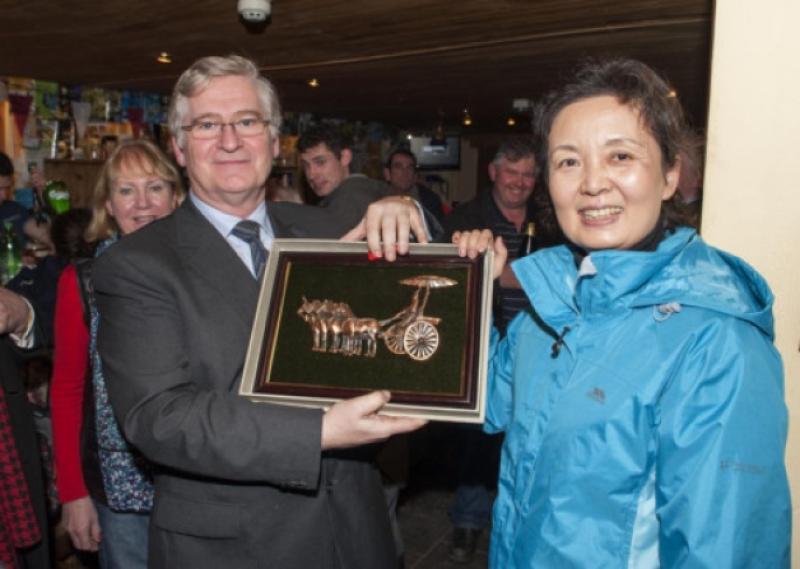 The wife of the Chinese Ambassador to Ireland, Madam Qiao Li was taken aback in Ballyouskill on Sunday evening.

The wife of the Chinese Ambassador to Ireland, Madam Qiao Li was taken aback in Ballyouskill on Sunday evening.

Eight members of the North Kilkenny Hunt in full regalia, on horse back, were waiting for her when she got off the coach that brought her to the Wheel Inn. That’s because 2014 is the Chinese year of the horse and eight is a lucky number for Chinese people.

She and other high profile members of the Chinese community in Ireland received a royal reception.

They were treated to Irish dancing, Irish coffees and refreshments and when Minister for the Environment, Phil Hogan walked in, ducking his head under the frame of the door, a massive cheer went up. The icing on the cake when John Doyle joined the gathering, via Skype, from China where he is married and teaching. The event was tinged with sadness for John as his mother Eileen passed away in November but his father, Christy was present.

The event was organised by Philip Sheppard of Sheppard’s Durrow - specialists in period pieces of furniture and artworks.

Philip lives in Ballyouskill and organised the familiarisation trip for Chinese diplomats in Dublin, professionals from China in Ireland and Chinese academics based here. Frank Brennan, owner of the Wheel Inn and his family, did a fantastic job catering for the crowds and it’s clear the Chinese will be coming back to Ballyouskill.