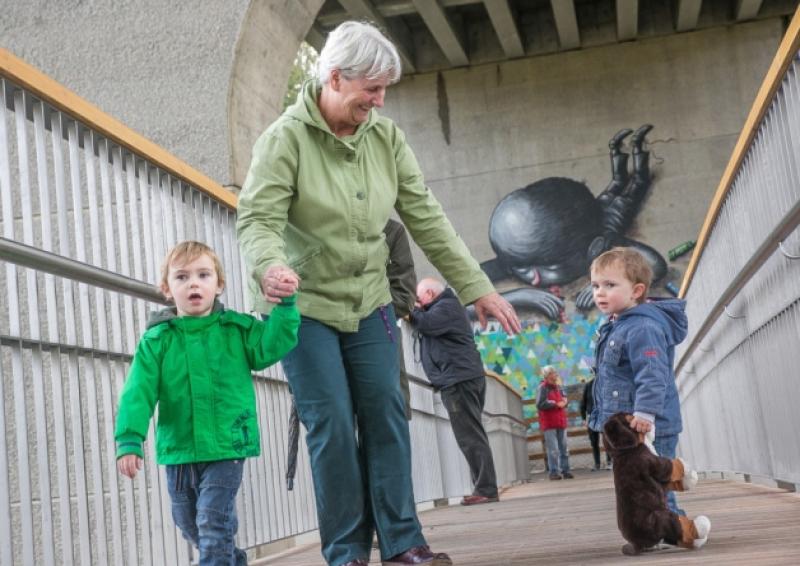 A new pedestrian bridge linking the Canal Walk on one side of the River Nore and the Lacken Walk on the other side in the city was officially opened on Thursday.

A new pedestrian bridge linking the Canal Walk on one side of the River Nore and the Lacken Walk on the other side in the city was officially opened on Thursday.

It will provide the citizens of the city and tourists an opportunity to investigate the river from Talbotsinch down to the Ossory Bridge while also opening up the possibility of walking, from just off the Freshford Road, as far as Bennettsbridge as part of the successful Trail Kilkenny and Nore Valley Walk.

It will form part of a looped walk and will be much used over the coming months and years adding yet another strong element to Kilkenny’s armoury of attractions and things to do.

The new pedestrian structure under the Ossory Bridge is in keeping with its surroundings and blends in perfectly.

And it is the latest instalment of a 12 year old programme of enhancement that is the river Nore Linear park, complementing work already carried out at Talbotsinch, Bishopsmeadows, , the Peace Park, John’s Quay, the Lacken Walk and the Canal Walk.

And Mayor Andrew McGuinness who officially opened the new bridge along with the chairman of Kilkenny Council, Cllr Pat Millea, drew guffaws from those who attended the opening when he said it was the best received bridge in Kilkenny, referring to the controversy over the new proposed bridge over the Nore, under Greensbridge, as part of the Central Access Scheme and the Lady Desart Bridge, at John’s Quay which also has its detractors.

Mayor McGuinness complimented members of the last borough council (now defunct) for taking decisions leading to the construction of the bridge, praising former councillor and fellow Fianna Fail member, John Coonan for his part in bringing the project to fruition.

He also commended celebrated graffiti artist from Kilkenny, Mick Minogue for the art work on one side of the new bridge and said it had enhanced the area.

He is to ask another of Kilkenny’s graffiti stars, Daniel Leonard to paint something on the opposite side of the bridge. This cannot happen until a leak from the Ossory Bridge above, built in 1985, is fixed.

He also thanked former county manager, Paddy Donnelly who first mooted the underbridge in 1978, seven years before the Ossory Bridge.

Simon Walton of Kilkenny County Council said it was a great day for Kilkenny. “We have a fantastic new bridge which will be a great amenity, part of the overall vision for the Kilkenny Linear Park.

“Lots of work has been done on it over the last 12 years from From Talbotsinch down to the Ossory Bridge,” he said.

Interesting fact - The Ossory pedestrian bridge is the longest span timber of its kind in Europe.