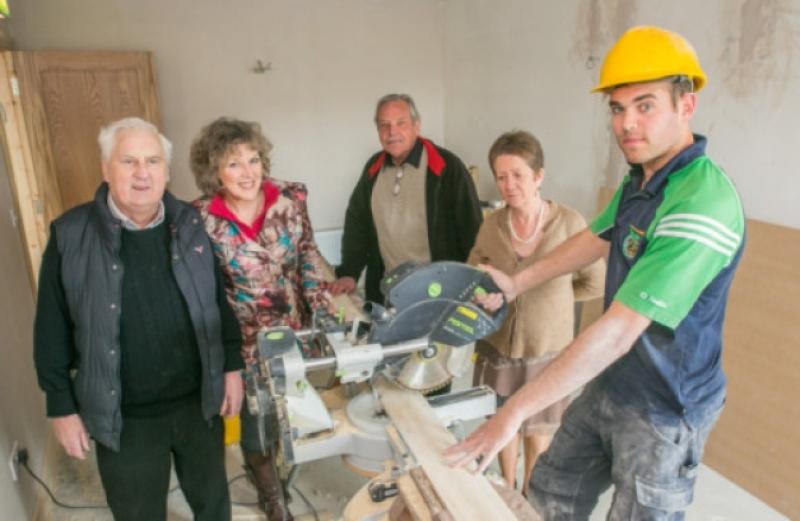 PEOPLE living with cancer and their carers will soon be able to avail of a wide range of holistic services for free when Cois Nore opens their doors on Walkin Street in June.

PEOPLE living with cancer and their carers will soon be able to avail of a wide range of holistic services for free when Cois Nore opens their doors on Walkin Street in June.

The finishing touches are currently being made to the building which will provide an oasis for people affected by cancer in the heart of the city.

Chairperson of Cois Nore, Liz Ruth who experienced her own cancer journey in 2007 explained how the charity came into being.

“A few of us had an idea for a while that we needed a cancer support service in Kilkenny and we decided to do something about it. The idea gathered momentum and in September 2011 Denise O’Donovan, Martin Brett, Regina O’Leary and myself sat around the kitchen table and the meeting grew very quickly from there.

“In no time there were over 30 people in attendance and Martin Rafter offered to facilitate which was a great help,” she said.

When Liz was diagnosed with colon cancer she availed of the services offered by the Solas Centre in Waterford and found this to be of great benefit to her. “In Cois Nore we will offer people complementary therapies and help people with cancer on their journey. We will also be working closely with the oncology ward and with GPs and public health nurses. It will also be a place for people to go and avail of counselling.

“We used the process of participatory democracy involving the public and we drew up a mission statement and objectives in early 2012. This was important as it helped us to focus on what was needed. Our aim is to provide compassionate and emotional support to people meeting the challenges of a cancer diagnosis and to provide holistic advice and support to people, their carers and their families meeting the challenges of adapting to life after diagnosis. We are person-centred and will be serving the people of the city and the county.”

To date the charity, which is also a limited company has received a small grant from the HSE but the board of directors is hoping to secure further funding.

Fundraising support in the city and county has been colassal to date and the charity, whose patron is hurling manager Brian Cody has already raised €130,000. The support from both individuals and local businesses and has been impressive with Liam Cody of Modern Printers giving the charity a five year lease on the Walkin Street premises. Ossory Social Services have also played a strong role in offering support to the charity.

“What is striking and overwhelming is the goodwill of people who have given their time and things,” said Maura McInerney who is a member of the charity.

“The cost is been kept to a minimum with most of the work on the centre done at cost price. We still need electrical and office equipment and computers and furniture so if anyone would like to sponsor us we would be delighted to hear from them. Anyone who would like to get involved can contact the charity on (085) 7219280. We would like to thank everyone who has supported Cois Nore and if anyone needs support before the centre is open they should ring the Solas Centre on (051) 304604.,” added Ms Ruth.

The Kilkenny Cancer Support Charity on John Street also raises money for Cois Nore. A fundraiser, the Ger Devane Memorial Golf Classic will be held at Kilkenny Golf Club on June 6 and 7. Teams of four cost €50 per person which includes food before you go out, barbecue on the 10th hole and dinner. Further details from Michael Devane on 086 250 4081.