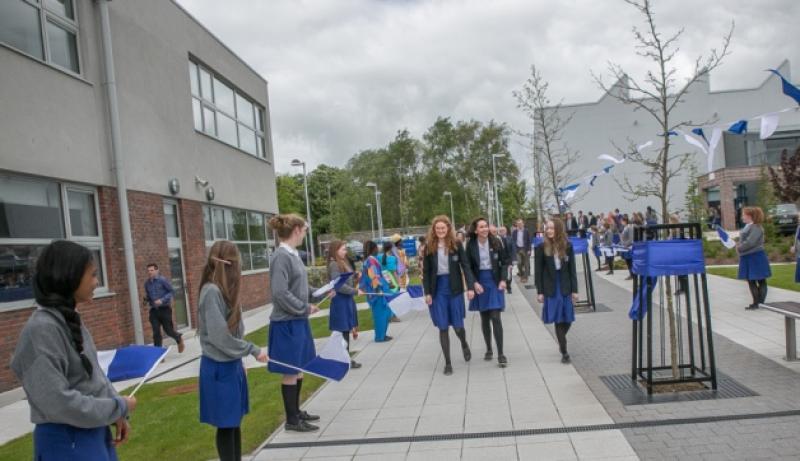 Loreto Secondary School Kilkenny marked the beginning of a new era last Friday, with the official opening of the Mary Ward Building.

Loreto Secondary School Kilkenny marked the beginning of a new era last Friday, with the official opening of the Mary Ward Building.

Present in the sports hall for the opening ceremony were hundreds of people, including staff, students, parents, board members and local politicians. Head Girl Mary Pat O’ Sullivan welcomed the hundreds of guests, and said that, in the years to come, many students and staff would benefit from the facility.

The ribbon was offically cut by Sr Noelle Corscadden, provincial leader of Loreto Ireland. Ms Corscadden said the school and the completion of the building project was a testament to the spirit of Ireland.

The building is named for Mary Ward, the founder of Loreto. The students from years four, five and six put on a pageant on the day, telling the story of Mary Ward’s life through song, mime and dance.

Chairperson of the Board of Management Martin Hanrahan paid tribute to principal of Loreto Colm Keher for his work in ensuring the building project happened.

“It is not easy to manage a school of 840 students – even though they are very well behaved young ladies– it is difficult to do while managing a €5 million building project as well,” he said.

Mr Keher’s involvement began in 2008, when he took over as principal of Loreto. He said there was huge pride in the school community over the new building, and that one student, upon being asked what the new building was like had replied “It’s like Glee, only better” and another who suggested that when the Loreto sign was erected on the Granges Road it should have five stars beside it.

“I loved everything about the design,” said Mr Keher, of his initial reaction to the plan.

“It was modern, light-filled, interesting. I loved the way it made the school visible to the commmunity, bringing an end to the dull, grey wall. I loved the interesting angles, thge large south-facing windows, and the meditation garden. I particularly loved the way it opened up views to the city and most imporantly, the two cathedrals – St Mary’s and St Canice’s – symbolising the school’s Christian heritage.”

A number of speakers paid tribute to the late Helen Renehan, the former principal of the school who was an instrumental in the development going ahead. Mr Keher also expressed gratitude to Sr Carmel Gallagher, who he said had been the first person to identify the need for the expansion project.

Following a liturgy from the Deputy Head Girl, Bishop Seamus Freeman said some prayers and blessed the new building with Easter water.

The building project began in 2011, but was stalled for some time after the initial contractor, McCann Builders, went into liquidation and withdrew. The school worked with the Department of Education and a new company to speedily resolve the situation. For picture special, see p48/49.