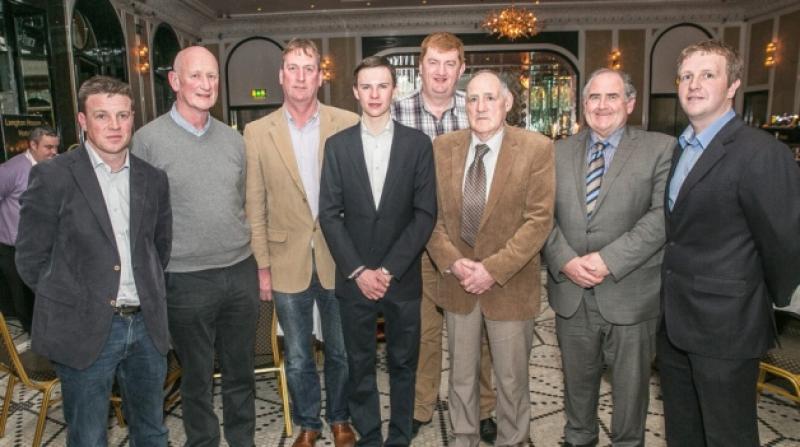 Racing fans and fans of Kilkenny hurling will come together this weekend for a unique celebration of both sports at Gowran Park Racecourse.

Racing fans and fans of Kilkenny hurling will come together this weekend for a unique celebration of both sports at Gowran Park Racecourse.

For the second year running, Kilkenny senior hurlers, management and backroom staff will join forces with Gowran Park to host a family race day on Saturday, March 8. The Kilkenny Supporters Club is also very much involved.

The event sees some of the finest hurlers in the county (and from further afield), both past and present, mixing and mingling with the public at a special race day. Details of the event were revealed at a launch night in Langton’s last Wednesday.

A star-studded panel of guest was the entertainment – young jockey Joseph O’ Brien, Mooncoin trainer Eoin Doyle, Shark Hanlon, Kieran Purcell and Ned Quinn of the county board. Ireland correspondent for Channel 4’s ‘At the Races’ Kevin O’ Ryan was the MC, quizzing the panellists on days gone by, the upcoming race day, and their picks for Cheltenham.

Last year’s event ended up having to be postponed due to the bad spell of weather that hit Gowran in the days before. But it was a huge success in the end, and another big showing is likely with this being Gowran Park’s centenary year.

The first race of the seven-race card begins at 2.25pm, and as with last year, the races will be named after hurlers and team management.

There’s plenty to do for the younger race-goers as well, with face-painting and bouncy castles. There will also be a full programme of music and entertainment, including a live Christy Moore tribute act. The prize for the race card draw is a family trip (two adults, two children) to Tayto Park, with overnight hotel accomodation. The Best Dressed Lady will win a stay in Derry’s Ramada Da Vinci Hotel.

Also, of interest to many people will be the ‘Cheltenham Preview’, which takes place immediately after the racing. There’s a quality line-up of panellists set to take part, including Tony Martin and Patrick Mullins. All proceeds from this will go to the injured jockey fund.

As usual, Gowran Racepark is well set up for the day. Free buses will leave town from the gates of Kilkenny Castle at 1.15pm. Entry to the event is €10, while admission is free for under-18s. Manager at Gowran Eddie Scally is encouraging everyone to come out and support the event.