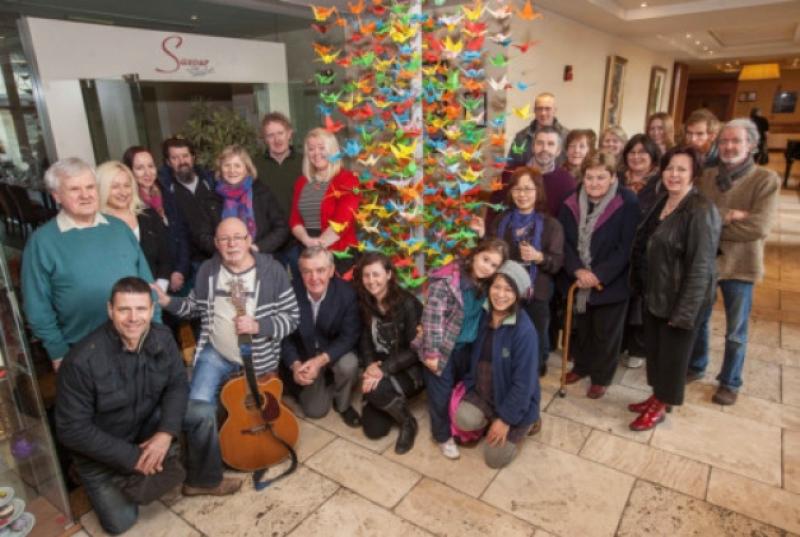 AN INNOVATIVE and exciting exhibition “Side by Side” will be exhibited around the city for the next six months in an attempt to raise awareness of suicide and to help combat social isolation.

AN INNOVATIVE and exciting exhibition “Side by Side” will be exhibited around the city for the next six months in an attempt to raise awareness of suicide and to help combat social isolation.

The project is the brainchild of the Men’s Shed and the group have been working on the project for the past number of months. As well as raising awareness about suicide and remembering all those who have passed it is also hoped to highlight the importance of getting involved in projects such as the Men’s Shed to combat social isolation.

The group made 525 origami cranes (one for each person who died by suicide in 2011) and the mobile will be exhibited around the city for a six month period, one month in each venue. The next venue will be The Tholsel on High Street.

Group co-ordinator, Ann Jones said: “We chose to make cranes because in Japanese folklore the crane represents immortality and it is said that the spirits of those who passed can travel to a higher plan on the outstretched wings of the crane, we really liked the imagery created by this. Also a huge thank you to the Kilkenny VEC who supported the project adding that the group can also be contacted on Facebook by searching under Kilkenny Men’s Shed.”

The Men’s Shed runs every Tuesday and Wednesday from 2-5.30/6pm (on the grounds of the Good Shepherd

Centre). Members of the Men’s Shed can also partake in the Veg Shed (community garden); which is aimed at supporting men and women in the community who are at risk of social isolation.

In March 2012 the Men’s Shed launched the “Helping Hands” initiative, whereby members of the Men’s Shed provide a handy work service to the community (especially those living alone and the elderly), in return for a donation to the project.

The Men’s Shed can be contacted contacting Ann on (085) 8381653 or emailing kilkenny@menssheds.ie