‘Is Jake’s life not enough?’ 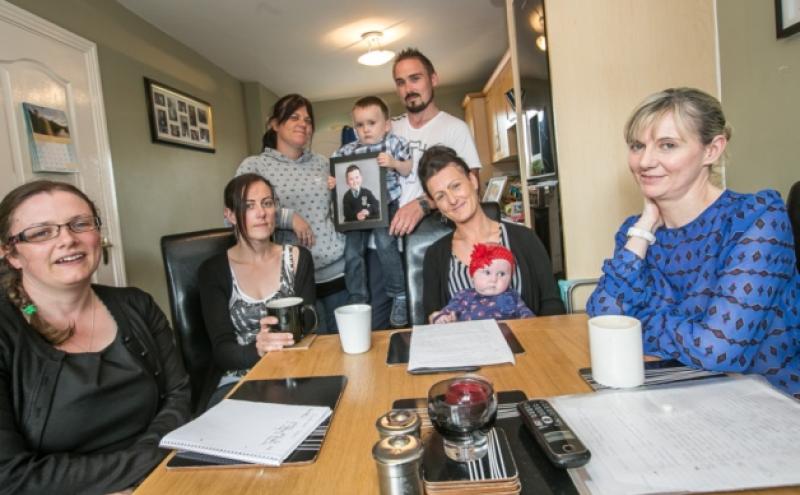 The mother of a local boy who died after being knocked down by a car last month is helping to organise a new campaign to make housing estates safer.

The mother of a local boy who died after being knocked down by a car last month is helping to organise a new campaign to make housing estates safer.

Roseann Brennan’s son, six-year-old Jake, lost his life in tragic circumstances while playing outside his house in Lintown Grove on June 12. Together with members of her family and some of her neighbours, Roseann wants to ensure that the roads in estates are safer for everyone.

At the family home on Monday, Jake’s dad Chris entertained their other two children, as Roseann explained the campaign. Around the table as well were her sister Pamela Costelloe, and neighbours Lisamarie Manuel and Joanne Doran.

They are focusing on three areas. Number one: They want speed bumps made a mandatory part of the construction of new housing estates, and they want to see the ramps put into existing estates which don’t already have them. The group says that residents have previously tried to get the ramps put in; indeed – they were originally part of the plan, they claim.

“Every housing estate existing and new should have speed bumps,” says Roseann.

“It should be enforced, at the top of their priorities. And the council should be accountable for it.”

They second thing they are seeking is for Kilkenny County Council to introduce new by-laws to reduce the speed limit in housing estates. The current limit is 50kph, but a by-law could reduce that to 30kph, which Roseann says, while not quite low enough, would at least be a start.

“We could go out and set our own speed limits here in the estate, but they can’t be enforced,” says Lisamarie.

The group feels the 50kph limit is totally unsuitable for an area where children play.

“That [speed limit] is fine if you are going on the Johnswell Road, but what we want to try and do is get that changed when you’re in a residential area, in the shopping centres, or schools,” says Pamela.

The third part is about an education campaign. But not for kids; for adults.

“A lot of us are childcare workers or we have small kids, and we are always enforcing Simon and Friends, teaching our kids about road safety,” says Roseann.

In the weeks before he died, Jake had achieved his ‘Safety Licence’ – an RSA-backed initiative involving road safety for children.

“The youngsters have more education than adults now would have got growing up,” says Roseann.

“But it shouldn’t be kids having to worry about it. Kids get lost in play.”

All four women say there have been other, less-publicised road collisions in Lintown with children – including a few weeks ago where a young girl was knocked off her bike and was rushed to hospital.

Now, all they want is to achieve something positive for other children out of a tragedy.

“We have a great family, but we are reaching out to the wider community,” says Roseann.

“This is gone beyond party politics. It is above politics. This is our kids, our future. Is Jake’s life not enough?”

The group have a Facebook page, which in a few days has over 3,000 followers. To get involved or find out more, see www.facebook.com/jakeslegacy or email jake.brennan.legacy@gmail.com.

Jake’s Month’s Mind took place on Saturday, July 12 at 3pm in St John’s Church. It coincided with the Christening of his sister Savannah, and his parents Chris and Roseann renewed their vows and exchanged new wedding rings, as the old ones are with Jake.