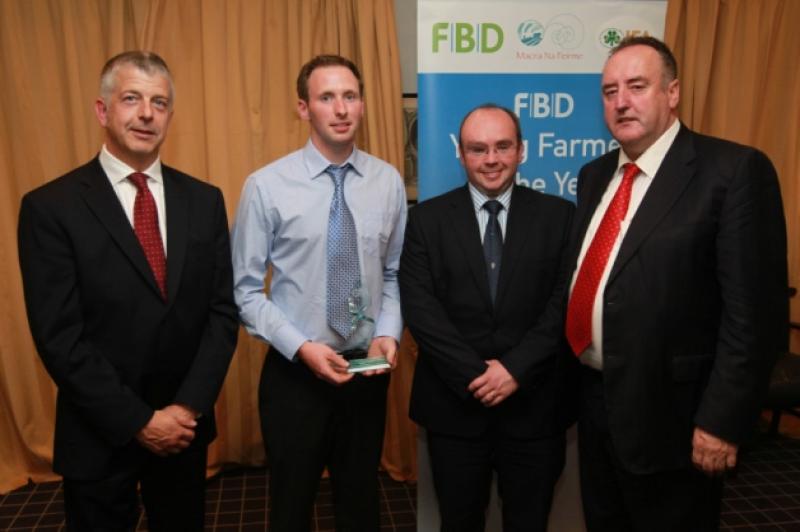 Following a challenging interview process, he was awarded the prize by Edmond Connolly, Chief Executive of Macra na Feirme.

Edmond Harty, the Ernst & Young Entrepreneur of the Year 2012, and CEO and Technical Director of Dairymaster acted as Chair of the final adjudication panel and announced the winners on Tuesday, September 3rd at an awards ceremony in the Dunraven Arms Hotel, Adare, Co. Limerick.

Thomas, a new entrant to this enterprise since April 2012, hopes to increase his herd number by milking on a low cost based system as this will maximise his return on investment. Land availability for the purpose of expansion and finding the best staff possible are some of the factors facing Thomas. He is a member of Suirside Macra, the Kildalton discussion group and is also the acting chair of the newly formed Greenshoots discussion group. This group consists of young farmers from Kilkenny, Waterford, Tipperary and Limerick which formed in 2012 with the aim of improving dairy management by learning from each other.

Macra na Feirme National President, Kieran O’Dowd, praised the young farmers who had made it through to the national final, “Macra’s ‘FBD Young Farmer of the Year Awards’ showcases excellence among young, highly progressive farmers and recognises their commitment to both the agricultural industry and their local communities. To support young farmers the Government needs to facilitate and create the necessary supports,” he said.

IFA President John Bryan said the Minister for Agriculture Simon Coveney must deliver new investment for farming in next month’s budget and support farmers as they play their part in the expansion plans for agriculture.

“As part of this, land mobility and restructuring remain important issues, particularly for new entrants. I would encourage the Minister to look closely at our pre-Budget submission and take on board the suggestions in the discussions at the cabinet table.”