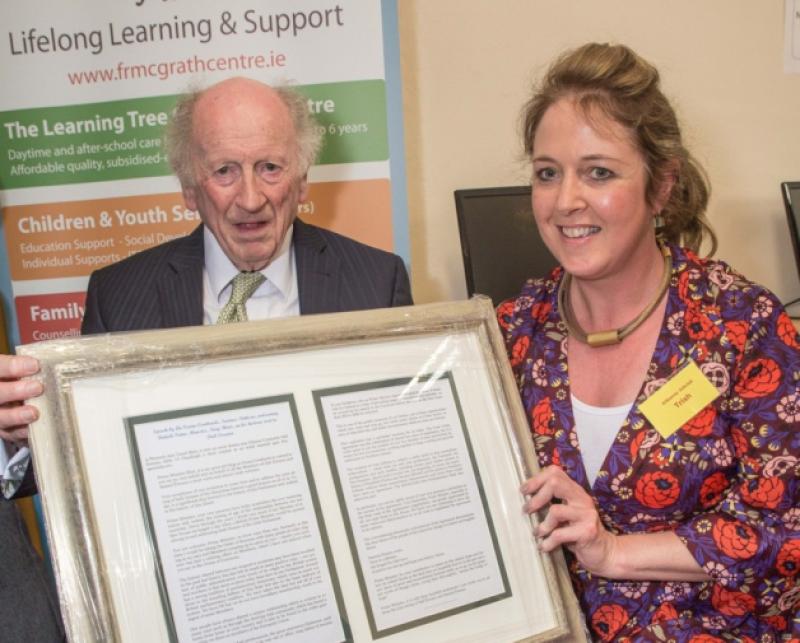 One of Kilkenny’s most well-known and respected figures was honoured last week with a lifetime achievement award for his decades of hard work, honesty, and efforts to improve other people’s lives.

One of Kilkenny’s most well-known and respected figures was honoured last week with a lifetime achievement award for his decades of hard work, honesty, and efforts to improve other people’s lives.

He also had the rare privilege of being awarded the Freedom of Kilkenny City.

Among the guests at Wednesday’s ceremony in Kilkenny Jobs Club were local TDs Ann Phelan and John McGuinness, members of the borough council including the Mayor of Kilkenny, and other dignitaries, friends and colleagues.

Seamus was presented with an engraved piece from Jerpoint Glass, and a framed copy of a speech he had given as Ceann Comhairle to former British Prime Minister Tony Blair at an historic joint meeting of the Oireachtas. As sharp as ever, the 77-year-old quipped he had thought his public speaking days were behind him.

“I was assured a number of months ago that I would never have to make a speech again,” he joked.

“I’m dumbfounded at this award. I just did my duty as I saw it and I am proud to have done it.”

“The fact that you brought several significant politicians from abroad to Kilkenny shows the pride that you have in the place; in your parish of St Patrick’s and club the Village; in the Party, and in your political beliefs and credo.”

He said it was fitting that Seamus was being honoured on the centenary of the 1913 Strike and Lockout, and paid tribute to the Jobs Club and St Canice’s Community Action Network.