JFK - 50 years on from the day that changed the world 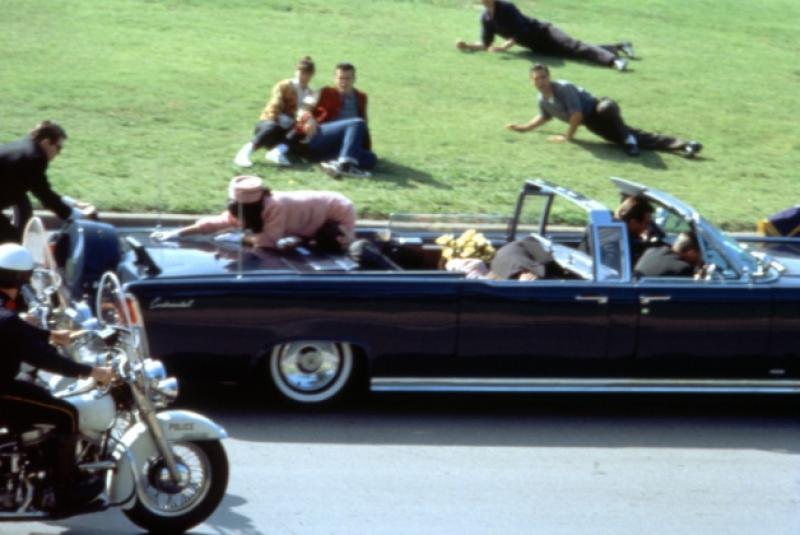 WHEN John Kennedy left his hotel in Fort Worth, Texas, on the morning of November 22, 1963, it was wet and miserable.

WHEN John Kennedy left his hotel in Fort Worth, Texas, on the morning of November 22, 1963, it was wet and miserable.

Despite the inclement weather thousands of people, many clutching umbrellas, braved the rain to catch a glimpse of their President.

After addressing a group of business leaders in what proved to be his final speech, Kennedy, accompanied by his wife Jackie dressed in a pink wool suit, made the short  30-mile journey to Dallas.

By the time Air Force One landed at Love Field less than three hours later, the grey clouds had cleared, replaced by sunshine and blue skies.

Here, once again, they were given a warm Texan welcome and the President and his wife walked over to the throng of well-wishers who had gathered at the airport.

At 11.55am,local time, they climbed into the convertible limousine, along with Texas governor John Connally and his wife, for the 10-mile tour of Dallas, with secret service personnel travelling in a car behind.

The motorcade was heading to the Dallas Business and Trade Mart where the President was due to speak at a lunch. Kennedy, conscious of his public image and that of Jackie, had said he didn’t want the top on the car unless it was raining.

Huge crowds lined the streets of downtown Dallas to watch the motorcade drive by with people standing on balconies and leaning out of windows. The President and his wife smiled and waved to the cheering spectators, many of whom could be seen with ‘Hooray for JFK’ placards.

The limousine, which had been travelling slowly to allow the crowds to get a good look at the Kennedys, was just five minutes away from its destination as it entered Dealey Plaza at 12.29pm.

It was here where the last living images of President Kennedy were captured. What happened next has been endlessly debated, it has been the subject of thousands of books and official inquiries have dissected every detail.

What we do know is that shots were fired at the motorcade. As Kennedy waved to the crowd something seemed to catch his throat. As Jackie leant over to comfort him a split second later the fatal shot struck his head.

We know this because the assassination was captured on a home movie camera by Abraham Zapruder, a local clothes maker who had gone to the plaza to get a better view of the passing motorcade.

Many eye-witnesses thought the first gunshot was a firecracker or an exhaust backfiring.

Dorothy Lecker, from Dunnington, near York, was in Dallas at the time. She worked at the University of Texas South Western Medical School and was among those standing by the roadside waiting to see the President’s motorcade pass by. “I was about half-a-mile from the School Book Depository in Dealey Plaza,” she recalls. “Suddenly there was unrest amongst the police and the crowd and shortly afterwards the President’s car was driven past at speed on its way to the Parkland Memorial Hospital.”

In the aftermath of the shooting there was confusion and fear as bewildered spectators tried to comprehend what had just happened, with several witnesses reporting they heard shots coming from the Texas School Book Depository.

Lee Harvey Oswald was confronted by Dallas policeman Marin Barker in the depository lunchroom on the second floor less than two minutes after the last shot. But he was identified by the building’s superintendent and at 12.33pm he walked out through the front door just minutes before the depository was sealed  off.

The ABC radio network broadcast the first nationwide news bulletin at 12.36pm, reporting that shots were fired at the Kennedy motorcade.

At the hospital doctors were unable to revive the President and a Roman Catholic priest was summoned to perform the last rites for him. President Kennedy was pronounced dead at 1pm, becoming the fourth US president killed in office, although an official announcement didn’t come for another half an hour.

Acting White House press secretary Malcolm Kilduff asked Vice-President Lyndon Johnson, constitutionally now the President, if he could announce Kennedy’s death. However, Johnson asked if it could be delayed so he could leave, concerned there may be a wider conspiracy.

Shortly after 1.20pm a rifle was found on the sixth floor of the Texas School Book Depository building.

Then, at 1.33pm, Malcolm Kilduff made the official announcement of the president’s death from a nurses’ classroom at the hospital, saying: “He died of a gunshot wound to the brain.”

Minutes later, Oswald was seen by Johnny Brewer, manager at Hardy’s Shoe Store in the same block as the Texas Theatre, turning his face away from the street and ducking into the entrance of the shoe shop as police cars drove up the street with their sirens on.

When Oswald left the shop, Mr Brewer followed him and watched him go into the Texas Theatre without paying while the ticket attendant was distracted.

The Dallas Police were called and within minutes two dozen policemen, sheriffs, and detectives arrived at the scene believing Officer Tippit’s killer was inside.

According to the police Oswald tried to shoot a patrolman yelling: “Well, it’s all over now,” before being arrested and taken away for questioning.

Just after 2pm a bronze casket carrying the president’s body, accompanied by Mrs Kennedy and the Johnsons, left Parkland Hospital for Love Field where it was carried on board Air Force One bound for Washington DC.

Just over two hours after the president was shot Johnson was sworn in aboard Air Force One alongside the newly widowed Jackie Kennedy, who was still wearing the blood-stained outfit she had on as she cradled her dying husband.

At six o’clock in the evening Air Force One arrived at Andrews Air Force Base, in Maryland, and the coffin bearing the president’s body was taken by ambulance to Bethesda Naval Hospital for an autopsy.

Just over an hour later Oswald was charged with “murder with malice” over the killing of police officer Tippit and before the day was out he had been charged with the president’s murder.

Half a century on and JFK’s assassination continues to haunt not only the United States, but the rest of the world, too. People still remember where they were when they first heard the news.

The Second World War had finished less than 20 years earlier, a conflict that claimed millions of lives, but it was the sudden, violent nature of Kennedy’s death that so shocked and appalled. While the rest of the world’s leaders — Khrushchev, De Gaulle, and Macmillan, who had recently stepped down as prime minister —were all old men, Kennedy was the vibrant embodiment of a new, more hopeful age.

For many people it felt as though a light had been extinguished and when they finally went to bed at the end of that dreadful day, they did so in a more troubled and uncertain world.