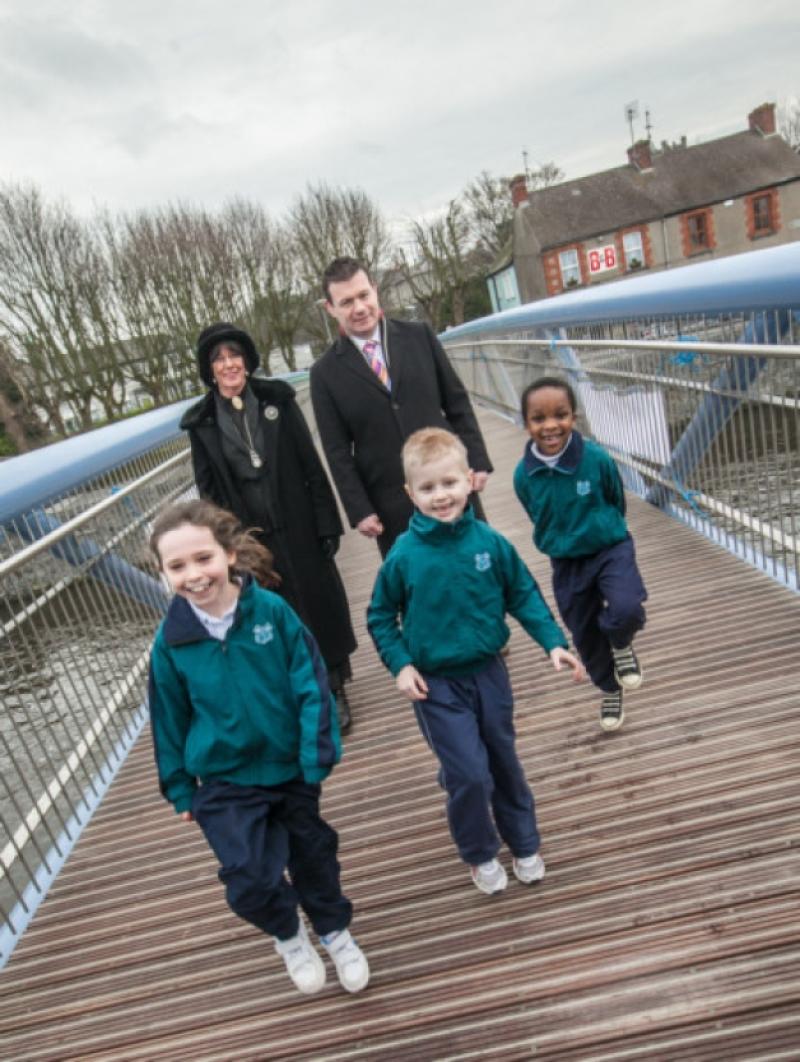 The long-awaited new pedestrian and cycle bridge crossing the River Nore in Kilkenny City was officially opened this morning by Minister of State for Transport Alan Kelly.

The long-awaited new pedestrian and cycle bridge crossing the River Nore in Kilkenny City was officially opened this morning by Minister of State for Transport Alan Kelly.

Over 100 people turned out to see the ribbon cut on the ‘Lady Desart Bridge’, which crosses from Bateman Quay to John’s Quay. Principal of Gaelscoil Osrai Sean O’ hArgain led a group of young students on bicycle through the town, and they were among the first to cross the bridge.

The €600,000 structure was lowered into place in late November, and site works have continued for the past two months. It is the first bridge to be built in the city in over 30 years, and allows access for all – regardless of mobility, age, or transport.

A group of around 25 protestors also attended the opening. They were not demonstrating against the new bridge, but again voicing opposition to the proposed Central Access Scheme, which would see a much larger road bridge built a few hundred metres north of the new bridge.

Cutting the ribbon, junior minister Alan Kelly said he was delighted to see the bridge finally completed, having himself committed Department funding for the project in 2012 under the Smarter Travel programme.

“The opening of this bridge will provide greater opportunities to the people of Kilkenny to leave the car at home, and walk or cycle instead,” he said.

“It is named after a wonderful lady who contributed a lot to this city.”

Mayor of Kilkenny Martin Brett said it was a proud moment for him, and that the bridge would provide ‘a new focal point of Kilkenny’.

Lady Desart was a philanthropist who invested money in various projects in the city and abroad. They included Kilkenny Library, the original Aut Even Hospital, the Woolen Mills, Kilkenny Woodworkers, Kilkenny Theatre, the Tobacco Growers Association, Desart Hall, Talbot’s Inch and the suspension bridge.