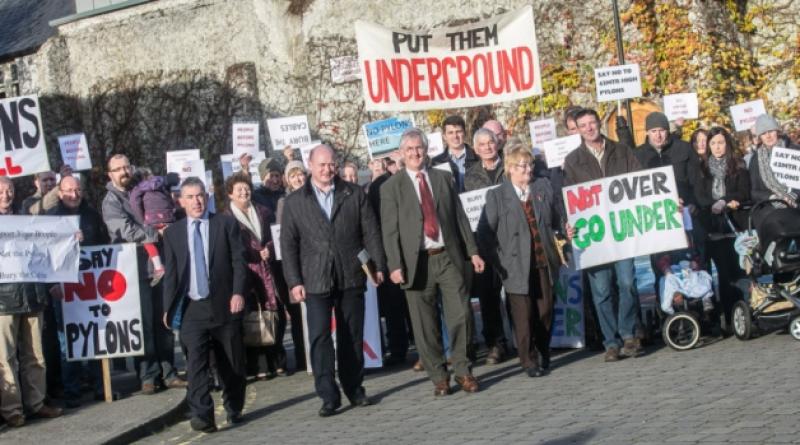 Protestors greeted employees from Eirgrid who arrived at County Hall on Monday to brief Kilkenny County Council on the Gridlink project.

Protestors greeted employees from Eirgrid who arrived at County Hall on Monday to brief Kilkenny County Council on the Gridlink project.

The group opposes possible plans for a network of overhead powerlines in Kilkenny. The council sought assurances that submissions made after the non-statutory consulation deadline of November 26 would be considered. John Lowry of Eirgrid told the members that they ‘absolutely will be’.

He also attempted to alleviate some of the concerns councillors had regarding the scheme. All councillors support placing the cables undeground rather than overhead, and they have been receiving a significant amount of emails and calls from constituents about it.

Mr Lowry said all possibilities were being considered, but that Eirgrid favoured the overhead option because it was more reliable and less costly. He said undergrounding the cables had not been dismissed.

A motion was proposed by Cllr Mary Hilda Cavanagh and seconded by Cllr Matt Doran. It read: “That Kilkenny County Council earnestly requests that Eirgrid put their extra high voltage power lines, which are defined as 400kv and 220kv, underground.”

It was passed unanimously by the council.