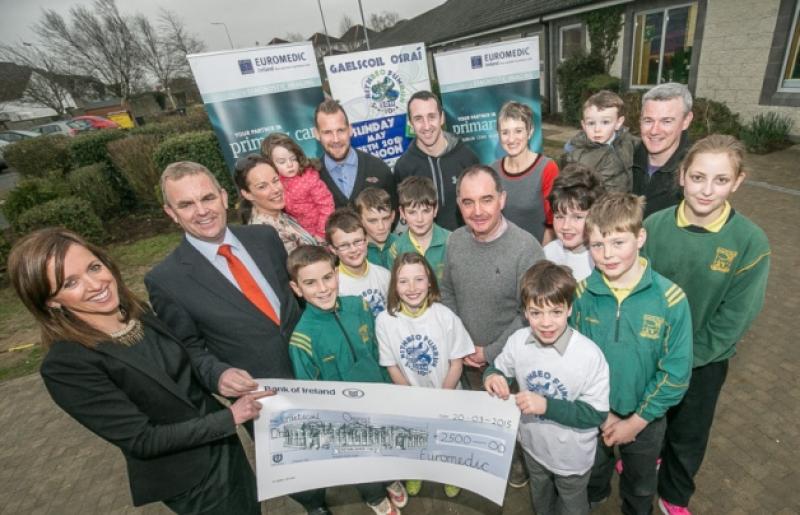 On Friday morning last week the solar eclipse was out-done by the launch of the three-in-a-row, Rith Beo’s A Trí, Gaelscoil Osrai’s fundraising effort for an astro-turf pitch for their pupils.

On Friday morning last week the solar eclipse was out-done by the launch of the three-in-a-row, Rith Beo’s A Trí, Gaelscoil Osrai’s fundraising effort for an astro-turf pitch for their pupils.

Representative of the organising committee, Muinteoir Michelle Ní Bhuachalla, said she was delighted with the launch. “Eoin Larkin and Jackie Tyrell spoke to the children about the run and the importance of sport and exercise in their lives,” she said.

“They were a big hit with the children and they gave freely of their time,” Muinteoir Michelle said.

Referring to the run she said: “We are delighted with the efforts of everyone over the last two years and are looking forward to a big effort for this run. There are 10km and 5km options as well as a 3km option for young children,” she explained. Walkers are also welcome as in other years for the 5km route.

This year Euromedic based on Dean Street, Kilkenny next to St Canice’s Church are the lead sponsors. “Tom Finn CEO and Olivia Dowling marketing manager of Euromedic have been fantastic in their support for us this year. This event couldn’t happen without their involvement,” Muinteoir Michelle said.

Over the last two years, Rith Beo has attracted 800 runners and the run has become one of the highlights of the school activity year.

“We would encourage everyone to come out and join us this year. There will be training beforehand on Wednesday nights for anyone hoping to start running,” Muinteoir Michelle said.