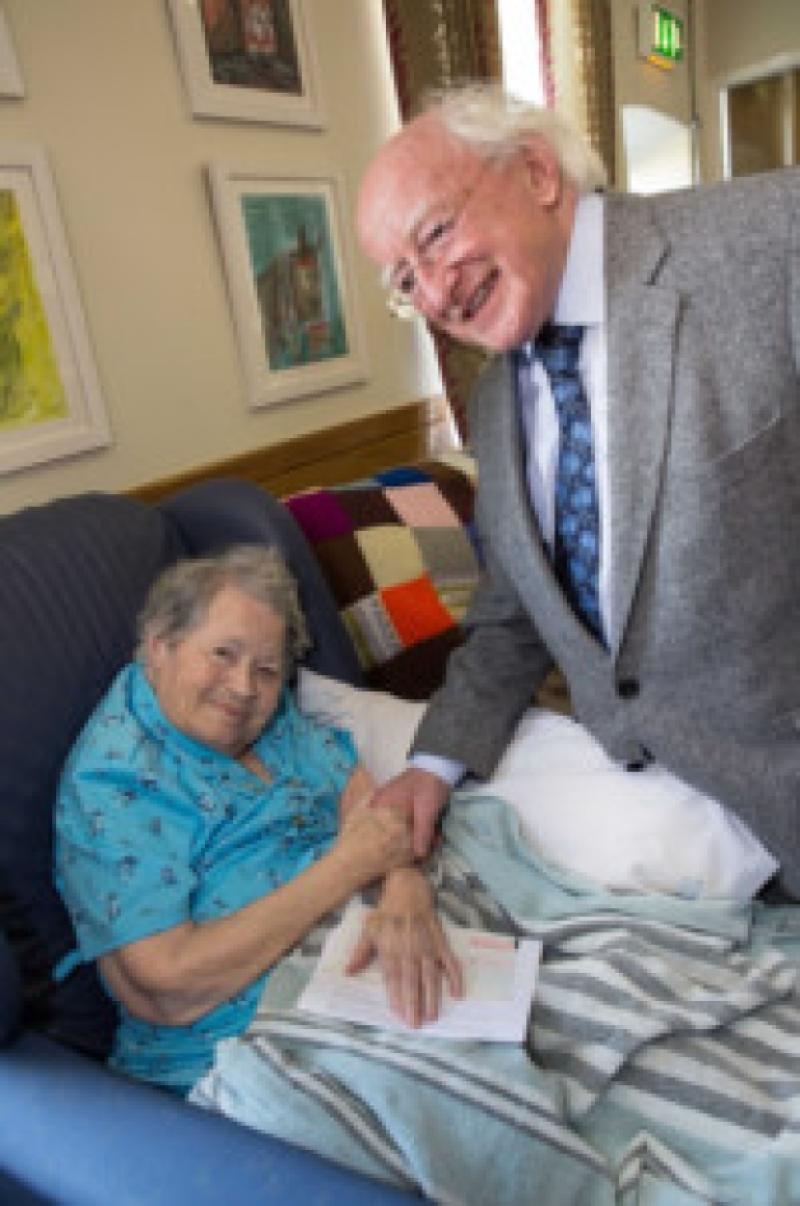 THE President of Ireland Michael D Higgins, with his wife Sabina, was in Kilkenny last Wednesday for a civic reception hosted by Mayor Sean O’ hArgain and the members of the borough council.

THE President of Ireland Michael D Higgins, with his wife Sabina, was in Kilkenny last Wednesday for a civic reception hosted by Mayor Sean O’ hArgain and the members of the borough council.

Greeted by a superb rendition of ‘Mo Ghile Mear’, sung by the children of the Gaelscoil Osrai assisted by Steve Cooney and Iarla Ó Lionáird, the president also signed the city visitors book. He made a speech in Kilkenny Castle to a gathering of local dignitaries, clergy, business people and others.

Later in the afternoon, he travelled to Thomastown, where he unveiled the Per Cent for Art sculpture entitled ‘Journeys’ in St Mary’s National School, and officially opened the new Activities Room at St Columba’s Hospital.

It was particularly fitting, however, that President Higgins should return to Kilkenny Castle. In his time as Minister for Arts, Culture and the Gaeltach, he oversaw much of the work of conservation and development of the castle.

He was also an important figure in the creation of the Heritage Council and the choice of its present location in the former Bishop’s Palace. In the castle’s Long Gallery, Mayor Sean O’ hArgain made a short speech acknowledging the long record of Mr Higgins’ contributions to Kilkenny, before he became president.

“You have been a regular visitor to Kilkenny Arts Festival, Ireland’s oldest – and we believe best – arts festival, which celebrates its 40th anniversary this year. I know you also to be an ardent admirer of the Kilkenny Design collective, this year celebrating its 50th year and finally that you also generously supported the Watergate Theatre, our Municipal Theatre, which celebrates its 30th anniversary.”

President Higgins himself reflected on the transferral of the property to the people of Kilkenny in 1967, with the building now managed by the Office of Public Works.

“It must be the most extraordinary act of inter-generational generosity,” he said.

“This wonderful building was presented to the people of Kilkenny for the token price of £50. It was great value for money – it’s heritage value is inestimable.”

On a similar note, Mr Higgins commended the work of the local authorities in the ongoing Medieval Mile project, the work on St Mary’s Church and the proposed river garden.

He also welcomed to the return to full health of Kilkenny hurling manager Brian Cody.

“I am very glad to hear that Brian Cody is back in good order,” said the president, a proud Galwegian.

“If he wanted to take a little break around the beginning of September, not to push things...” he joked, before earnestly expressing good wishes.

“I want to wish Kilkenny well in the upcoming championship. The game of hurling is forever associated with Kilkenny and the excellence they have brought to it.”

A fellow Labour Party member, Mayor O’ hArgain said it had been a privilege to have the president and his wife as visitors in the city.

“Most of you will know that today is particularly meaningful for me as mayor and in a personal capacity,” he said.

“For most of my adult life I have been proud to call both you a Uachtaráin and Ms Higgins friends. I wish you and Ms Higgins well on the rest of your trip to Kilkenny today, in the remainder of your term of office and hope that you will be back in our midst in the not too distant future.”