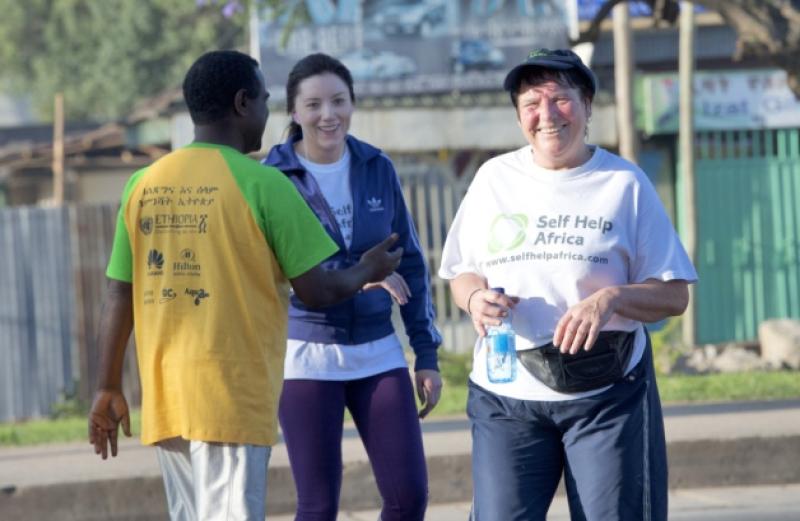 Running in Ethiopia to raise funds for charity was one of the highlights of 2013 for Enda Teehan who has worked in the SOS in Kilkenny for the past 37 years.

Running in Ethiopia to raise funds for charity was one of the highlights of 2013 for Enda Teehan who has worked in the SOS in Kilkenny for the past 37 years.

This was Enda’s second trip to Ethiopia with Self Help Africa after completing the same run last year.

This year the 10km was supposed to take place in Addis Ababa but due to terrorists threats in the area, the charity were advised to pull out. So instead of doing the run in Addis Ababa, Enda and a group of 14 other Irish participants decided to run the 10km in a different village called Hawassa in Southeren Ethiopia.

Enda and the Irish volunteers who decided to do the race in Hawassa began their run on November 22 at 6am to avoid the scorching heat.

Enda completed the run in one hour and 30 minutes, which she was delighted with. Enda says herself she ‘wouldn’t be much of a runner and never ran as a child’. She has only been running for the last three years.

Three years ago she joined a boot camp. One of the girls in the boot camp with Enda was working for Self Help Africa and had encouraged Enda to do the run in Ethiopia. To Enda’s surprise at the end of the bootcamp, Operation Transformation’s Ronan Skully met with them to motivate them to take part in the run. Ronan aslo has two adopted children from Ethiopia of his own. He convinced Enda to take part in the run. Since she met with him she took part in two charity

In order to take part in the run, each participant had to raise €3,000 for Self Help Africa. Enda found it harder to raise the money this year because of the bad press charities have been getting recently.

After the run, the rest of her stay in Ethiopia involved visiting farms and small businesses that are supported and funded by the work of Self Help Africa. Enda described her experience as ‘simply life changing’. She said that all the local people they met were so beautiful and welcoming.

‘Poverty in Ireland is nothing compared to poverty in Ethiopia. Even though the people had so little they were still so welcoming and generous to us, it’s really humbling as they have absolutely nothing yet they seem so happy’, said Enda.

This year going to Ethiopia, Enda collected as much pens and pencils as she could.

“All that the children want out there want is a pencil to be able to write with. It’s amazing how much we take for granted in this country,” she said.

One of the Self Help Africa funded projects Enda got to visit this year was a farm. She described women as the ‘backbone of Africa’. Enda felt it was great to see where the money from Self Help Africa goes and how it is spent.

To make a donation at www.selfhelpafrica.org.