Churning butter on the Castlecomer plateau 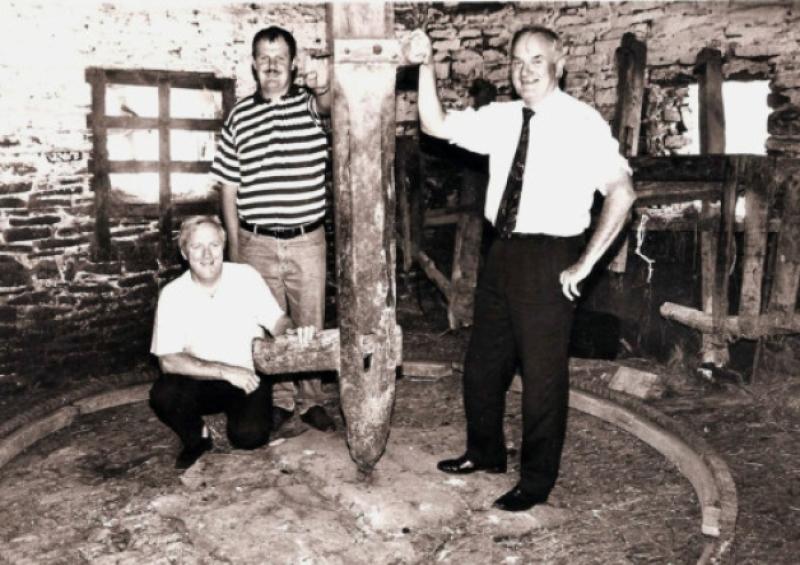 A recently published book provides us with a unique insight into farming practices in this area and in particular around the Castlecomer Plateau.

A recently published book provides us with a unique insight into farming practices in this area and in particular around the Castlecomer Plateau.

“Animal powered Churning Gears On The Castlecomer Plateau And Elsewhere In Ireland” is written by accomplished author, Michael Conry and Brian Coulter and explains how these innovative farmers made salted butter by using their animals to churn the milk and in some areas used the animals to break up anthracite so it could be used in the fire while there were turning milk into butter.

The book explains the reasons for the very high density of these wooden and iron machines in Kilkenny and describes the two types of animal-powered churning gears found on the Plateau, wooden indoor churning machines and cast-iron outdoor gears machines.

For those reasons, farmers on the Plateau concentrated on producing salted butter for sale to the shopkeepers in the local towns (Castlecomer, Abbeyleix, Kilkenny, Bagenalstown, Carlow and Athy).

In the 18th century dash-churns were used to churn the butter but it the 19th century most people churned the cream in end-over-end churns. It was a laborious and time consuming job even for those with only 2 or 3 cows. But farmers on the Castlecomer Plateau who had 6, 8, 10 or more cows installed wooden indoor churning gears in the early decades of the 19th century to reduce the workload of churning large amounts of cream into butter. Around the middle of the 19th century they began to install outdoor cast-iron churning gears (machines) instead of the wooden churning machines.

Horses, ponies and donkeys were commonly used to drive these churning gears. Dogs were used in Wales and on the Continent of Europe but there is no evidence that they were used in Ireland.

The 1998 survey showed that there were almost four times more churning gears on the Castlecomer Plateau than in the surrounding hinterland. The 2000 survey carried out in Co. Carlow showed that, although the area of land east of Barrow is 9 times greater than the area west of the River, there were the same number of churning gears (80 versus 81) on the Castlecomer Plateau, west of the River Barrow and in the east of Co. Carlow.

The remains of many cast-iron churning gears are plentiful on the Castlecomer Plateau and other parts of Ireland but the only cast-iron metal churning, in working condition, is preserved in Tommy Kinsella’s farmyard in the townland of Curranree near Corries Cross, Co. Carlow. Only remnants of the indoor wooden churning gears still exist in various parts of the country. The only intact workable wooden churning gear in Britain and Ireland was rescued in the Glen of Imaal by the late Michael Deering, Lemonstown, Hollywood, Co Wicklow.