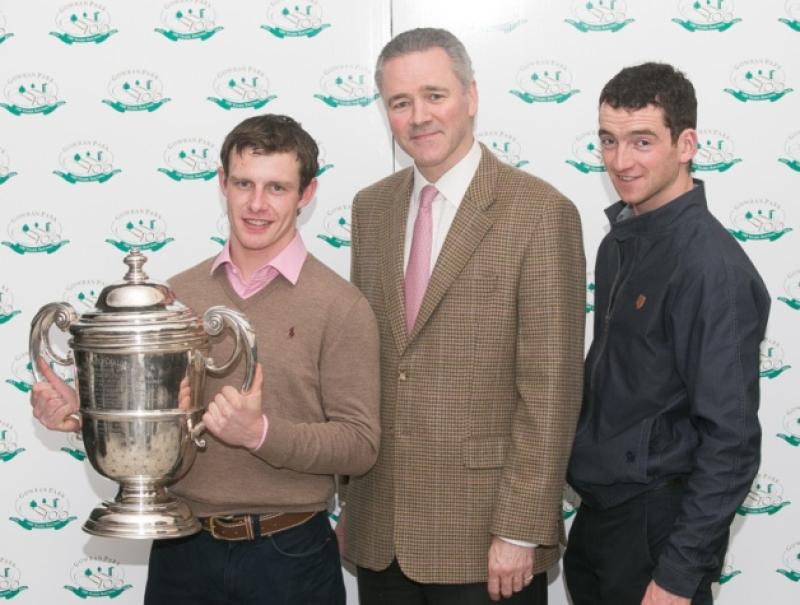 Champion jockeys Paul Townend and Patrick Mullins were on the panel last Thursday evening at the official launch of this year’s Goffs Thyestes Chase.

Champion jockeys Paul Townend and Patrick Mullins were on the panel last Thursday evening at the official launch of this year’s Goffs Thyestes Chase.

TV3 racing pundit Denis Kirwan hosted the discussion, saying there was a ‘great romanticism’ to the cup.

“It is an iconic trophy,” he said.

“If you read the honour role, it’s like a who’s who of the national hunt scene.”

Last year, the Willie Mullins-trained On His Own took the win in style, and was subsequently narrowly beaten in the Gold Cup. Paul Townend, fresh from a win on 33-1 McKinley in Naas last week, said it was a great honour to have won with On His Own in 2014.

“It was nice to get on him last year, he loves it around Gowran,” he said.

“It’s a proper through-run race, and you need a bit of luck as well.”

The 11-year-old is one of four entries from the local yard this year. Set to carry a top-weight of 12st, he could be joined by stable companions Djakadam (10st 9lbs), Dogora (10st 2lbs) and Abbey Lane (9st 10lbs). Jadanli won the race for trainer Paul Gilligan in 2013 and he has been allotted 9st 2lbs this time around.

No gathering in the run-up to Gowran ever escapes a mention of the legend that was Arkle – that 1964 win still in the thoughts of some of the more senior attendees. There were shared memories too of other past winners, with both Tony and Maureen Mullins fondly recalling the 1972 victory of Dimwit, who went on to win a Grand National.

Record-breaking jockey Patrick Mullins, who has clocked up 73 wins at Gowran Park, is also champing at the bit to get on the turf.

Those hoping for a few tips at the event were scribbling furiously when he mentioned Djakadam, who previously ran in the Hennessy Gold Cup, but came up short.

“But I do think he could be good, there is a big day in him.”

Gowran Park manager Eddie Scally also mentioned Djakadam, as well as On His Own and Barry Connell’s Foxrock (10st 13lbs).

“The Thyestes is a very competitive race,” he said.

Group chief executive of Goffs Henry Beeby said Goffs would remain committed as sponsors to the legendary race for several years to come. He also revealed that last year had shown a significant upturn, with an end of year turnover for Goffs of €109 million.

Denis Kirwan said things were looking rosy for the industry: “These are exceptional days,” he ventured, turning to Patrick Mullins.

“The firepower you have in your yard is like being in Disneyland for horses.”

Mullins agreed, contending that the sport is currently enjoying one of its finest eras, with top trainers, horses and jockeys.

“Yes it’s a perfect storm at the moment,” he said.

“We will just enjoy every minute of it.”

With a bit of luck, we all will. Roll on next Thursday.