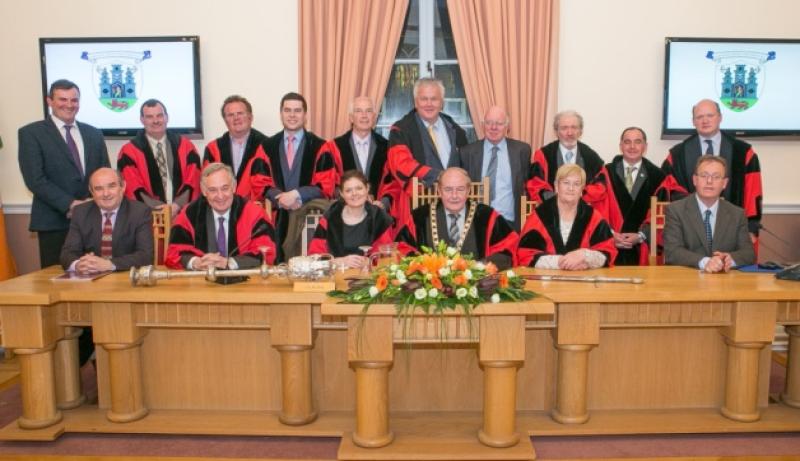 The Sinn Fein councillor Kathleen Funchion once spoke of being overwhelmed at her first meeting of Kilkenny Borough Council five years ago – a young, new female member: uncertainty over the little rules, who sits where, who wears what, when to speak, etc. As the borough council gave up the ghost a fortnight ago, at its final meeting, another, (now former councillor) Joe Reidy recounted stories from his own childhood, of the respect and dignity when a red-robed aldermen would sweep by.

The Sinn Fein councillor Kathleen Funchion once spoke of being overwhelmed at her first meeting of Kilkenny Borough Council five years ago – a young, new female member: uncertainty over the little rules, who sits where, who wears what, when to speak, etc. As the borough council gave up the ghost a fortnight ago, at its final meeting, another, (now former councillor) Joe Reidy recounted stories from his own childhood, of the respect and dignity when a red-robed aldermen would sweep by.

Is it a nonsense dress-up game, or does singling out councillors in the red robes in this manner offer some gravitas and a sense of occasion? They didn’t wear them very much toward the end – most recently at this month’s last-ever meeting, or before for conferring the freedom of the city.

And what about the mayor – a pointless, relatively-powerless political garnish with a salary top-up, or a necessary and vital democratic part of what it means to be from Kilkenny City? The outgoing mayor, Martin Brett, was in his fourth term as first citizen. Like most mayors, he says the work is demanding and requires something close to ubiqiuty. But he loved it all the same.

That office of mayor, mostly as we know it, goes back to the 17th Century. In 1609, King James had signed a charter to give Kilkenny city status, and Kilkenny’s chief magistrate became a ‘mayor’.

In 2011, Mayor Brett’s Fine Gael colleague, David Fitzgerald, fulfilled a boyhood dream when he took the office for the first time. Of course, many of Fitzgerald’s own family members have also been mayor; the Crottys are certainly no stranger to public office.

“I think the general public have a huge regard for the office of mayor. And I think the public – the citizen of the city – values the mayoralty to an extent that the management doesn’t fully understand.

“In particular, whenever the mayor attends an event – whoever the mayor is – it immediately gives that event, and the people of the community a sense of importance, that the event is important, it gives encouragement to those who are organising the event.”

Former councillor Sean O’ hArgain was first elected in 2004, and was mayor in 2012. He says there is so much work to get through that there is almost no time for the robes and pageantry.

“Really very little because you only get to wear the robes maybe two or three times a year,” he says.

“There’s the election, the AGM, and then for major civic events during the year, civic receptions, which we had relatively few of.”

But the mayor is still the (wo)man who our visiting guests want to meet – be it Mayor of Minnesota Kevin Taaffe again last year, the Irish President, the British ambassador, the 400 year celebrations, the homecoming of the hurling team, or just whatever local goup is invited to a reception in City Hall. The mayor – or some kind of a mayor – will always be desired in Kilkenny.

And the chain of office, coveted by many, has remained in the hands of a small enough group of late. For all the co-operation and camaraderie in the council at times, the mayoralty has been above (or below) that. Voting pacts remained in place to carve up the position between a small few. In the past 12 years, all mayors have been Fine Gael or Labour politicians (often several times individually), with the one exception of Green Party councillor Malcolm Noonan’s one year.

Even without a directly-elected plebiscite, other, equally-fine and hard-working councillors could have had a go, but there’s the voting pact; it’s as un-demcratic or as democratic as you want.

Some, like Fianna Fail’s John Coonan, admits to feeling a little bitter waiting outside watching in for 20 years, but he had arun as deputy mayor, and no one understands politics like himself.

“To me, it was a little bit of an insult down to the years to every man and woman that sat on the borough council, to think they never even were considered the opportunity to be first citizen. I’m sorry we never changed the system, we spoke about it year on year, but we never actually did what we spoke about.”

The new electoral areas have made things interesting. There is still some uncertainty on how the mayoralty will be carved up. Will the same or different parties ally to keep the chain from other hands? Will the city candidates ensure no rural mayors – or vice versa? Will the Freedom of the City now stretch from Kilmanagh to Inistioge? Does it even matter?

At the very least, the mayoralty was a boost potentially worth more than €14,000 annually to a councillor, on top of the other allowances, salary and expenses. It will be interesting how the new council divide up the spoils, with the Cathaoirleach of that body earning a good pay package too, before ever the SPCs or other committees are handed out.

Perhaps there should be less focus on the trappings of office, and more made of the deadly weapons which are occasionally brought out for display on the top table of City Hall. The ceremonial guild that followed after the mayor’s seal of office is still brought out today for important occasions or the visit of distingushed guests. The sword (from around the same date) bears on one side the arms of Kilkenny – a triple-towered castle with a cannon underneath, while the other side has the Royal Arms of the Stuart families.

In 1672, the city mace then joined it. The Duke of Ormonde presented it in 1676; it is 43 inches long. The council also have a seal – one and a half inches by a quarter inch – dating from 1609, which reads ‘The Seal of the Office of Mayoralty of Kilkenny’.

In his term as mayor, David Fitzgerald used to joke that the only power he had left as first citizen was to administer public executions. There’s a rumor that that particular power was never revoked, but perhaps it can now be grouped dormantly with these other archaic artefacts – much like the titles of ‘alderman’ and ‘Corporation’ – consigned to the past or a misspoken anecdote. Or, at best, they will end up in a museum – perhaps the new St Mary’s Museum. No word yet on what will happen those lovely red robes, however.