Susie’s memory lives on in unit 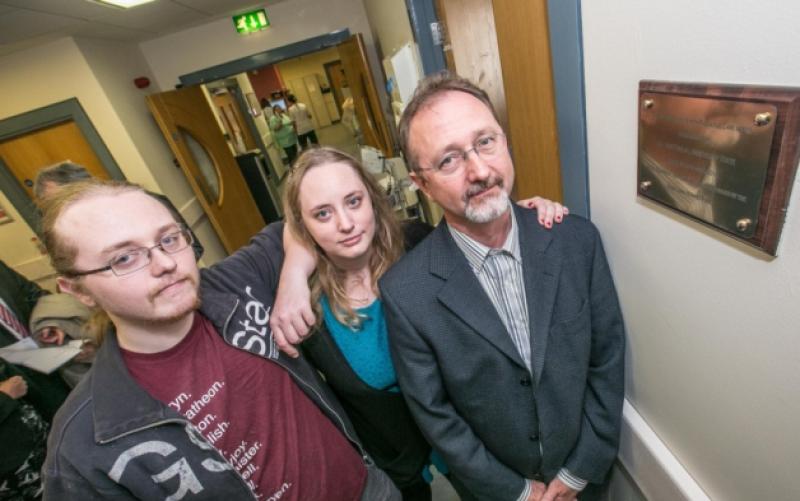 The HSE and St. Luke’s Hospital, Kilkenny hosted a ceremony to mark the designation at the hospital of six beds for patients with palliative care needs.

The HSE and St. Luke’s Hospital, Kilkenny hosted a ceremony to mark the designation at the hospital of six beds for patients with palliative care needs.

The purchase of the specialised beds was enabled through a donation of €50,000 from the Susie Long Hospice Fund (SLHF) which has done so much to keep Susie’s memory to the fore and to highlight the need for early diagnosis of cancers, particularly bowel cancer.

Ann Phelan Minister for Rural Development officiated at the ceremony in the Education Centre at St Luke’s and later unveiled a plaque to mark the designation of the beds at the hospital’s Surgical 3 ward.

Chairman of the SLHF Tommy Roche said the contribution from the Susie Long Hospice Fund will benefit many patients with palliative care needs by supporting their care with the use of specialised equipment and facilities by staff in the Surgical 3 ward and will ultimately improve the experience for patients and their families at this critical stage of their life.

“Susie Long had a short life by today’s life expectancy standard, however, her legacy to the population of Carlow/Kilkenny in terms of her advocacy for the day service unit (which will come on stream next year) and the provision of palliative care facilities (hospice unit) has led to improved facilities and services for all patients who attend at St. Luke’s and this achievement cannot be under estimated at a time when health services are facing considerable new challenges on a daily basis,” Tommy said.

The new facility will include four single rooms and one double room. The SLHF is covering the costs of upgrading the rooms and has also agreed to consider any further requests for specialist equipment or items on a case by case basis.

The ceremony was also attended by Susie’s husband Conor Mac Liam, their son Fergus and daughter Aoife and some of Susie’s friends. The donation from the Susie Long Hospice Fund and the hospital’s arrangement of the beds comes shortly after the 7th anniversary of Susie’s untimely passing in 2007, following a diagnosis of cancer. Conor Mac Liam told the gathering that it was an emotional day for his family and that the designation of the beds was another step in theirs and the SLHF’s years of campaigning to achieve better hospice facilities closer to home for people in the Kilkenny area.

Speaking at the ceremony, Minister Ann Phelan said: “Susie Long’s tragic circumstances left a lasting mark on us all. Indeed, Susie’s courage in speaking out and demanding better care is an inspiration. I’m sure that her family – despite their ongoing sadness at losing her too young – must be very proud. Great credit is due to everyone involved in the SLHF, in having raised just short of €680,000 in such a short number of years.

“Their contribution to St Luke’s for these six beds is a most laudable initiative and one which will be greatly appreciated by the people of Carlow and Kilkenny who use this hospital. It is good to know that the existence of these six beds will offer improved comfort and solace to families and their loved ones facing difficult situations – such as that which befell the late Susie Long and her family and friends.”

“As a Minister to the government and a public representative in this constituency, I am very proud of the fantastic response in the community to the SLHF. Their work, of course, isn’t finished yet. We’re mindful also that a €21 million major extension to SLGHCK features among its new and expanded facilities for this hospital, a 24 bay dedicated Day Services Centre – which will do so much to address the access to endoscopy services that Susie herself spoke so passionately about. In welcoming today’s designation of six specialised beds in the Surgical 3 ward, I’m also looking forward to being back here early next year to mark the official opening of the capital development – mindful, indeed, that it will contain what is to be known as “The Susie Long Day Services Centre”. We are fortunate to have a fine general hospital such as St. Luke’s serving this part of the country, I’m delighted to see investment in it come to fruition and to join in tributes to its progressive staff. I look forward to working with them and the SLHF on further projects, such as the development of regional and local/satellite dedicated, hospice facilitie,” she said.

General Manager of St Luke’s, Ann Slattery paid tribute to both the Friends of St. Luke’s Hospital and the Susie Long Hospice Fund: “The ongoing support from the community through many fundraising activities is much appreciated by the hospital and has contributed greatly to the development of services at St. Luke’s. The Friends over the years, purchased the first CT scanner, Dexa Scanner, contributed to the upgrade of the paediatric unit and many other initiatives and continue to work with the HSE to progress the MRI scanner development. We’re delighted that we now have a similar relationship with the SLHF.”

“The HSE has been working in recent years to ensure a greater priority within its hospitals for palliative care/end of life care as a core activity. The provision here in the hospital of new state of the art beds/mattresses and chairs will mostly be used for patients with palliative care needs (subject to the usual clinical needs prioritisation of patients) and will enhance the service being afforded to meet their particular requirements in this specific area of the hospital. The area includes four single rooms and one double room and we are grateful to the SLHF for covering the costs of upgrading the equipment for the rooms and to consider any further requests for specialist equipment or items on a case by case basis. It is also hoped in the future that an overnight family room for relatives of palliative care patients will also be provided. The SLHF have agreed to fund the conversion of a space, which will provide a kitchen, lounge and overnight facilities for relatives. This will come about when a suitable space becomes available following transfer of some services to the new building in early 2015,” she said.

The Clinical Director at St Luke’s Prof. Garry Courtney said the designation marked another point at which the late Susie Long’s advice and hopes for others in society were being listened to and acted on: “Seven years ago, news of Susie’s delayed diagnosis highlighted the need to decrease waiting lists for an essential diagnostic service such as a colonoscopy and the need to create extra capacity for this and other services to allow prompt diagnosis and patient treatment. I am happy to confirm that significant work has been done in the meantime to shorten the waiting list for endoscopy services, and currently all urgent colonoscopies are treated within four weeks. The development of the new Day Services Centre in St Luke’s, which was promised to Susie in person before her death, is nearing completion and this will further increase capacity and reduce waiting times for patients waiting routine endoscopy procedures.”

“Almost 30,000 people die in Ireland each year. While a majority would like to die at home, the reality is that at least half of all deaths occur in acute hospitals, and 20% take place in long-stay care facilities such as nursing homes. Only four per cent of deaths occur in hospices.

“In the South East, the priority proposal is the development of a 20 bed inpatient unit on the grounds of Waterford Regional Hospital, to serve as a hub for the delivery of specialist palliative care services. The four (Carlow/Kilkenny, South Tipperary, Waterford and Wexford) community and hospital based teams will have direct links with this unit. The development of a 12 bed inpatient satellite palliative care unit here at St Luke’s remains an aim in line with that regional development. The progression of phase 2 of the redevelopment of St Luke’s will be an opportunity for the SLHF to contribute as part of its design team with our satellite palliative care/hospice in mind,” Dr Courtney said.