Passing Out of 133 Recruit Platoon 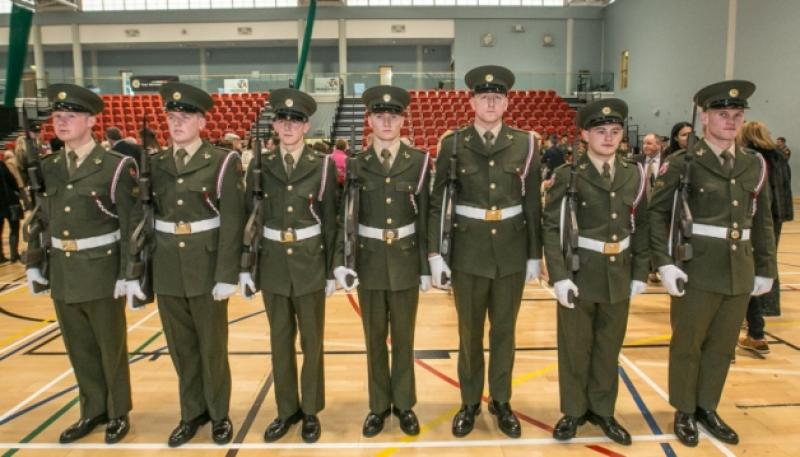 Last Thursday was a proud day for the friends and families of troops in the 133 Recruit Platoon as they attended their passing out parade at the Watershed in Kilkenny.

Last Thursday was a proud day for the friends and families of troops in the 133 Recruit Platoon as they attended their passing out parade at the Watershed in Kilkenny.

The 133 Recruit Platoon is drawn from many counties including Kilkenny, Tipperary, Waterford and Wexford, Cork, Kerry, Mayo, Galway. In total, there were six personnel from the south-east, including Gary Lehane from Kilkenny City and Darren Fanning from Ballycallan.

BG Brennan presented all the soldiers with certificates of achievement for graduating to the rank of two-star private. The 133 then gave a drill display.

It was an especially proud day for Ballycallan man, Private Fanning, who managed to win the individual prize for ‘Best Shot’. His excellent accuracy and exceptional weapon-handling skills were singled out for praise by BG Brennan.

Brigadier General Kieran Brennan addressed the parade. He said it was a day of pride and celebration for all the recruits, as well as their friends and family.

“All of the recruits here today went through a rigorous selection process,” he said.

“Today’s parade is the culmination of 17 weeks of training.”

“With my own son Shane currently serving in the Lebanon, I am very conscious that some families will be without their loved ones this Christmas,” he said.

The Defence Forces has recruited up to 1,500 new recruits in recent times. During the 17 weeks of training, the 133 Recruit Platoon completed four phases of training: Induction training, basic training (foot/arms drill, marksmanship and fitness), tactical training, and a final phase to prepare for the passing out parade.

Officer Commanding 3 Infantry Battalion Lieutenant Colonel Stephen Ryan also congratulated the members of the platoon on the successful completion of their recruit training.

“This has been the fourth successive recruit platoon that ‘Stephens Barracks has trained in as many years and it really brings a great sense of achievement to the barracks,” he said.

“Both family and friends should be extremely proud of each and everyone’s achievement today.”