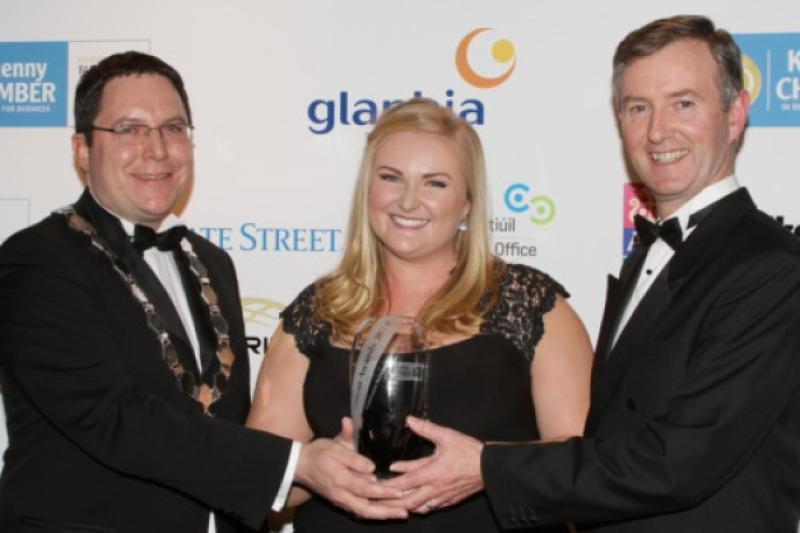 Presenting the award to Brian Dunlop, Glanbia CEO Siobhain Talbot congratulated all the winners on their achievements, and noted the success story of the overall winners.

She said Glanbia was delighted to sponsor the Chamber awards and highlight all the positive work being done by local businesses in Kilkenny, adding that Glanbia was very proud of its roots in the South East of the country, and in particular Kilkenny and Waterford.

A packed Lyrath hosted the awards, which has been running for over 15 years, with in excess of 530 guests sitting down to a four course meal following a champagne reception. Guest of honour at the function was Minister of State Ann Phelan, and also in attendance was Chairman of Kilkenny County Council, Pat Millea; Mayor of Kilkenny Andrew McGuinness and John McGuinness TD.

Minister Phelan was high with priase for the entire business community of Kilkenny, and noted the excellent work done by the nominated companies who were up for awards.

Callan Dental claimed the Customer Service Excellence Award and also Service Provider of the Year. Tellecommunications Software Systems Group, based at St Kieran’s College, were winners of Innovation in Business and Information and COmmunications YTechnology while the Kilkenny Arts Festival were also winners - for Culture/Heritage Tourism award and for Excellence in Communications

Employer of the Year - McDonalds

Excellence in Hospitality - The Newpark Hotel

Exporter of the Year - Callan Bacon

Retailer of the Year - Grogan & Brown