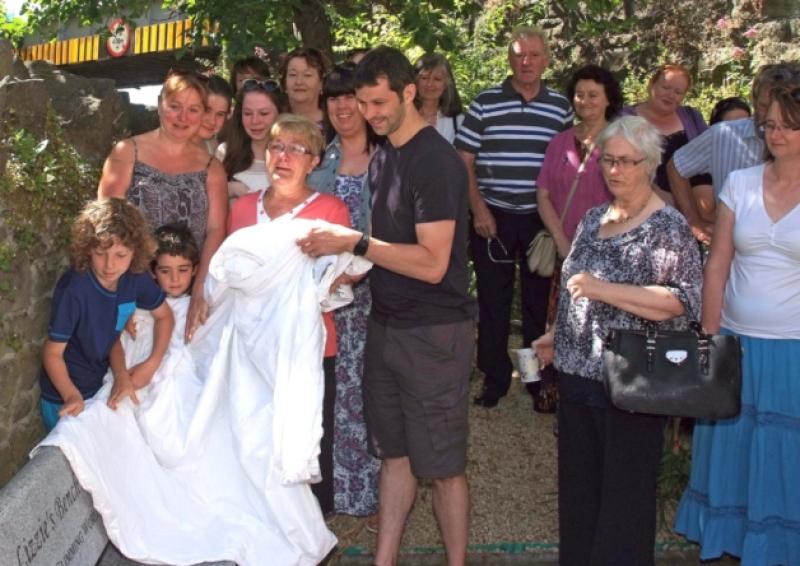 One of Kilkenny’s most inspiring human beings has been immortalised in stone. The late Lizzie O’Farrell who died nearly 11 years ago underwent six liver transplants without complaint.

One of Kilkenny’s most inspiring human beings has been immortalised in stone. The late Lizzie O’Farrell who died nearly 11 years ago underwent six liver transplants without complaint.

A granite bench was unveiled, by her heartbroken family, at the GROW office on the city’s Barrack street on Monday morning, in her honour.

It replaces a wooden one which was stolen by unscrupulous individuals from the same spot two years ago.

However the new one will be harder to remove as it is made of granite and is cemented into place. It faces a little shrubbery row and garden and seems a peaceful place in which to sit.

Lizzie’s mother, Margaret; sister Maria Rowe and brother Philip (who underwent a bone marrow transplant to help and try and save his sister’s life and came home especially from London for the event)) were present for the ceremony along with other family members.

And Maria paid tribute to Slimming World for helping with the cost of the lovely piece made by monumental sculptor, Matty Gargan of Friary Street, Kilkenny which has a lovely black and white photo of Lizzie.

Maria spoke of Lizzie’s husband, Keith Finnegan and thanked him warmly for the love, care and devotion he showed towards Lizzie all through her illness.

On behalf of GROW, Eileen Watson recalled Lizzie with great warmth and said that even though she was sick, Lizzie lifted the spirit of everyone in GROW. “I hope this bench has a long, long life and is here for generations to come after we are all gone” she said.

Maria and others took part in a Slim For Good, a sponsored fundraiser organised by Suzanne Wilkinson of Slimming World in the Club House Hotel, Patrick Street, Kilkenny where the groups meet every Tuesday night.

“Suzanne runs five classes and each class nominated a charity. And when the five were put forward to the entire membership, the vast majority opted for Lizzie’s bench,” Maria said. Suzanne Wilkinson was also present at the unveiling

GROW is a worldwide organisation which aims to nurture mental health, personal growth, prevention and full recovery from all kinds of mental illness.