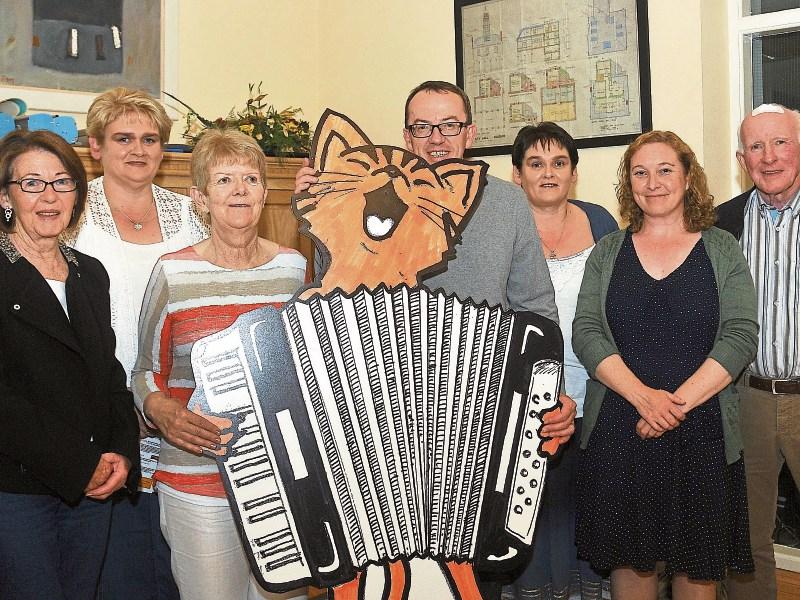 Accordion players and music lovers generally will gather in Kilkenny this weekend for a unique festival that has been a long time in the planning.

The "Big Squeeze" is the fulfilment of a dream long-held by technical consultant, teacher and musician, Noel Cleere. According to Noel, most people in Ireland associate the accordion only with Irish Traditional Music - and with good reason.

In Ireland, the accordion is rarely heard outside of traditional circles. While its role in the traditional Irish music world is admirable, Noel’s was determined to organise an event that would educate and demonstrate the true potential and significance of his favourite instrument and rekindle an interest in learning and/or a return to the instrument . The Big Squeeze Festival was born and in coop- eration with The Acorn Club Freshford, the dream will finally be- come reality on August 12, 2016

Noel's live-long love affair with the accordion began when his grandfather, Paddy O Donoghue, taught him to play his first tune on his 10 button Melodeon.

Music was always a central part in Noel's life . Following the formation of an Accordion & Tin Whistle band in Scoil Ailbhe in Thurles, Noel was soon learning piano accordion. He quickly progressed to the full-size 120 bass model by age 11. Dermot O Brien was a major influence on him and he always wanted to play like him. Years later he would play with him.

In October, Noel will join Ollie Hennessy and DANA in a show entitled "Carry Me Up To Carlow" in October. This will be Noel’s third appearance with Ollie and the team.

He is very popular with the audiences. Noel has never been found wanting when asked to play at any Charity event or fundraiser.

He simply loves to play. Noel is Chairperson of the Acorn Club Freshford and is highly committed to the Club’s aims of encouraging, fostering, promoting and supporting artistic talent.

This French Manouche band is highly popular on the corporate, drinks receptions, race meetings, formal events and restaurant circuit. It's a class act made up of Jacque- line Burke (Violin), Sam Barker (Guitar), Tony Doherty (Guitar), Nick Banks (double bass) and Noel Cleere on piano accordion. Paris Swing will be one of the lead- ing acts at the Big Squeeze.

The Castletown Accordion Orchestra from Cavan was originally formed in 1981 as a marching band. They were successful winning national titles and taking part in a European Tour. In 1993, the current musical director, John Chilton took over and changed the band to an accordion orchestra.

They have won numerous titles at All Ireland level and at other national events held throughout the country including the Northern Ireland Open Accordion Championships. Individual members have won numerous solo, duet and ensemble competitions.

The Orchestra will take part in a num- ber of Big Squeeze Events including “ The Squeeze on The Square” (canal Square) and the “Squeezing In The Years” concert in St Kieran’s College. They will also entertain The Lord Mayor at the official opening of the Big Squeeze in St Kieran’s college on Sat 18th August at 10am

Grainne Rynne and her band

Grainne learned to play the accordion as a young girl in Waltons on Parnell Square in Dublin by Sean Kear- ney. She won many trophies in various accordion com- petitions and also performed as part of the full accor- dion orchestra. inne and her Band will be joined by Kathy Henderson and take part in “Squeezing In The Years” at St Kieran’s College Thea tre on Saturday 13th August.

Kathy K is a South African born Mezzo soprano, now resident in Dublin. She previously enjoyed a highly suc- cessful operatic career with the role of Carmen as her principle role for which she won several awards and criti- cal acclaim. She first came to Ireland to sing with the RTE concert Orchestra and then went to tour the UK and Belfast. She has now returned to her singing career having extended her repertoire to music she has loved for a long time and this includes Portuguese Fado, Cape Verdean Morna, Tango, Gypsy and Balkan, Latin American, torch songs, and folk and traditional music. She is currently touring Ireland with the show Voyage, alongside accordionist Grainne Rynne and Musical di- rector and bassist Eugene Wogan , and percussionist David Dayas well as special guests.

Mary Kelly, one Ireland’s finest harpists, originally came from Freshford. Her family moved to Castlecomer and Mary now teaches in Dublin. Mary has won numerous awards and acco- lades for her performances and is the holder of the prestigious Bardic Award that was presented to her by Comhaltas Ceolteoiri Eireann.

Mary has travelled the world representing Ireland and has accom- panied President Mary Robinson and President Michael D Higgins on many trade missions. Mary can be found playing the harp at many state functions but she has never forgotten her roots.

She took part in The Acorn Club’s 1916 Commemoration in St Lachtains C of I in Freshford in April and is committed to Freshford and Castlecomer communi- ties. A harpist with heart, everyone is looking forward to hearing Mary again at “Squeezing In The Years” and “Robbie Byrnes Night.

On the last Wednesday of every month, accordionists travel from far and wide to Pa Johnsons Bar in Cork City for their monthly get-together and the music and atmosphere is breathtaking.

This is the Cork Accordion Club and the gathering is man- aged by Donal Ring Junior supported by his fa- ther, Ceili Maestro Donal Ring. And it is not only accordionists that turn up, you’ll find fiddle play- ers, tin whistle players, mandolins and more. The Cork accordion club will arrive in force for The Stramash on Friday August 12th in the Brogmaker on the Castlecomer Road. They will be joined by other musicians from Cavan to Kerry/ MC for the night will be Donal Ring Junior. The club will also be taking part in events on Saturday 13th Aug at St Kieran’s College.

Bruce Lindsay will lead a twenty— strong contingent of fine Scottish musi- cians in our Stramash on Friday Aug 12th. Bruce, together with Gladys Wright and the Button & Bows team have put together a wonderful program of Scottish Music and Airs for “Robbie Byrnes Night. This will be an evening where the Scottish and Irish Traditions will fuse in to what promises to be a wonderful evening of entertainment, Bruce and the club are famous throughout Scotland for their annual Shand Morino Day when hundreds of accordionists throughout Ireland and the UK come together to celebrate the heritage of the great Sir Jimmy Shand.

The Acorn Club who are the organisers of the festival were recently surprised when one of the UK’s largest distributors of the world-class Scandalli accordion brand and accordion MIDI systems, announced they will exhibit their systems at this years Big Squeeze Workshops and Exhibitions on Sat Aug 13th in St Kieran’s College.

“It was certainly a bolt from the blue” says Acorn Club chairperson, Noel Cleere.

“This is our first Big Squeeze Festival. We were planning to attract major accordion manufacturers and distributors to subsequent festivals over time. Needless to say, when I received an email from Scotland Accordions expressing an interest in taking part in this year’s events, I was delighted.