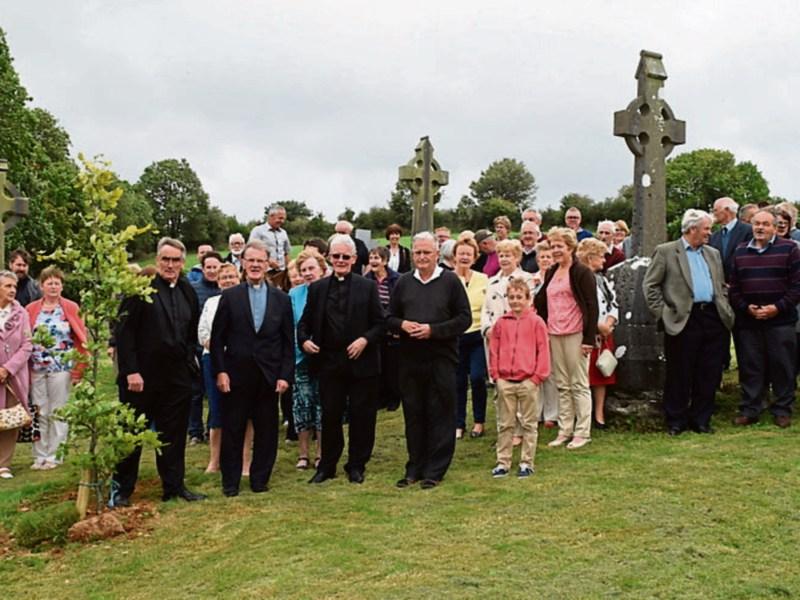 A special service to commemorate 150 years of St. Killogues Church, Kilnaspic was held in on Sunday.

The Church Sacristan, for many years is Catherine Hogan. During the mass readers were, Kathleen Long-Walsh and Pat Kinsella. Prayers of the faithful were recited by Rev. Fr Pat Comerford P.P. and Kitty Kinsella.

The gifts were carried to the altar by Kitty Barden, Hilary Duggan, Claire Comerford, Annette Reddy, and Jim Hearne.

Jason Dunphy was the main organiser of the parish event. After the ceremony there was a memorial tree planting when a mature beech tree, was planted in the middle of the cemetery, and a plaque will later be erected giving the date of the 150th anniversary.

When the church was first built, there was a small one room primary school located just outside roughly where the ramp and entrance is today. It was closed prior to 1888 with the opening of Clogga school (in addition, Tobernabrone school was in close proximity). As Clogga school was in the area, for many decades the children of that school made their First Confession and Communion in Kilnaspic Church. The old church is much further down the hill and closer to Aylward’s house. Some ruins of this church remain in the graveyard. The rectangle is the current day location of Kilnaspic church. For the majority of its existence, mass time in Kilnapsic was 9.00am on Sunday morning, before moving to 9.30am for a number of years, then back to 9.00am, before the present time of 8.00pm on Saturday night.

Although the parish priest Father Ned Walsh was the driving force behind the construction of Kilnaspic Church (and later Mooncoin church), it is important to note that he had two curates to help him in his day-to-day tasks, which allowed Fr Walsh the time to plan church building!

In 1866, the curates were Fr Phlean and Fr Kelly, who was subsequently replaced halfway through the year by Fr O’Farrell. The Mooncoin parish registers for 1866 shows that there were 83 baptisms in the parish that year (unfortunately these are not broken down by church).

Of these, Father Walsh only managed 12 baptisms, which means the two curates officiated at the other 71! There were also 10 marriages in the parish in 1866. Fr Ned did perform the bulk of these, six, with Fr Phlean officiating at the remaining four.

The current Killinaspic Church celebrates its 150th anniversary this year. Firstly, the spelling! Like surnames, place-names have morphed (usually abbreviated) over the years, so there are at least five spellings of it. The surveyors who were recording place names in the 18th century would have written the name in English spelt phonetically as they heard the locals say it in Irish. In the Irish language, the towns land was called ‘Coill-na-Easpag’, and so was anglicized as ‘Kill-in-aspic’. ‘Coill Na Easpag’ literally means ‘the Bishops Wood’ (and ironically not ‘Church’ which is the usual meaning of ‘Kill’). It was called ‘Bishops Wood’ because the Bishop of Ossory owned acres of woods in this area that stretched down towards Clonmore. The Bishop of Ossory actually had something of a ‘holiday home’ in Clonmore, which he owned until at least until the 15th Century!

Kilnaspic Church was built during a Catholic church boom in Ireland. It has been calculated (by people with a lot of time on their hands!), that there was one Catholic Church built for every week of the 1800’s. This was to be expected after the abolition of the Penal laws of the 18th century, and following Catholic Emancipation in 1829.

The current Kilnaspic Church is the third church in the present area. The first church, which had a thatch roof, was located towards the opposite end of the graveyard (above Aylward’s house) and was demolished around 1801 (it was only in existence a short period before this). There was a stone church built near that spot which lasted until the current Kilnaspic Church was built in the 1866. There are also ruins of a church in Tubrid nearby, however this church would have been Anglican/Church of Ireland when it closed down. Similarly the churches in Rathkieran, and Polerone were all Anglican/Church of Ireland when they were closed down, as Catholic Churches were banned, although originally they would all have been Catholic (before Henry VIII). Kilnaspic Church is dedicated to Saint Killogue (Cellog), a 7th Century Irish Saint, who’s feast day is the 26th March (sometimes given as the 13th April). There is some evidence that the old church in Tubrid was also dedicated to Saint Killogue or ‘Killocus’, and it may just have been as simple as the first stone of the original church being laid on that date, or being consecrated on that date etc.

In 1865, Mooncoin parish received an energetic parish priest. He was Father ‘Ned’ Walsh originally from Mooncoin. Within his first few months in the parish he commenced building the new Kilnaspic church with the financial help of the local parishioners and also, most importantly, with the support of his uncle Dr Edward Walsh, Bishop of Ossory, another Mooncoin native. The Falconer brothers from Carrick-on-Suir were the builders responsible for the construction. Architecture wise, Kilnaspic church is considered Gothic revivalist. The most obvious example of the gothic features are that all the arches are pointed (over the doors, windows, altar etc) and not round, so to force our view upwards.

The people of this parish were known for their generosity. In the years before 1866, over £1,000 was raised for the Daniel O’Connell statue fund, responsible for creating the O’Connell statue that still graces O’Connell Street, Dublin today. Also, in the summer of 1866, Mooncoin parish was plunged into mourning when three cot fishermen drowned on the River Suir. They had being trying to bring in a haul of salmon when their boats capsized. A fund was similarly setup for the support of their widowed wives and children.

When Kilnaspic church was first opened the layout was very much as it is now except, with regard to furniture, it would have been very sparse. The original altar was made of wood, while there were no statues, carpet or marble to be seen. The original windows were also made of clear glass. Fr Ned used Kilnaspic church as a testing ground which eventually led to the creation of the current parish church in Mooncoin 3 years later, using roughly the same plans as Kilnaspic scaled larger and with the addition of the two transepts. Fr Ned died in 1881 aged 59 and is buried in front of the Blessed Virgin altar inside the parish church. Kilnaspic Church received a number of additions to the aesthetics in its early years. The ‘stations of the cross’ pictures date from 1924 and were received from Rev Corcoran born in Cloneen (near Clogga). These ‘Stations’ still hang in the church today and so are nearly 100 years old. In 1928 the current Carrara marble altar was installed with a donation from Peter Dunphy, a native of Tubrid, and late of Australia. It was originally more impressive as it was part of a marble decoration that covered the back wall. Some of the marble was removed and the altar pushed out following Vatican II in the 1960s. The altar is engraved with a replica of the ‘Last Supper’. Around the same time local families sponsored stained glass windows, which they usually dedicated to deceased relatives. The most impressive piece of art in the church is the statue behind the altar. It is a likeness of Michelangelo's Pieta (with the addition of a cross). Amazingly the niche were the statue is located was not in the original church. Around 1910 a hole was knocked in the wall behind the altar and a mini extension built just to house this new statue shipped in from Italy! The statue is made in Carrara marble and was created in Pietrasanta, Tuscany, Italy by a famous sculptor studio called ‘Ferdinando Palla Scultore’ whose name is inscribed on the piece. His great-grandson still runs a smaller version of the business in Italy today.