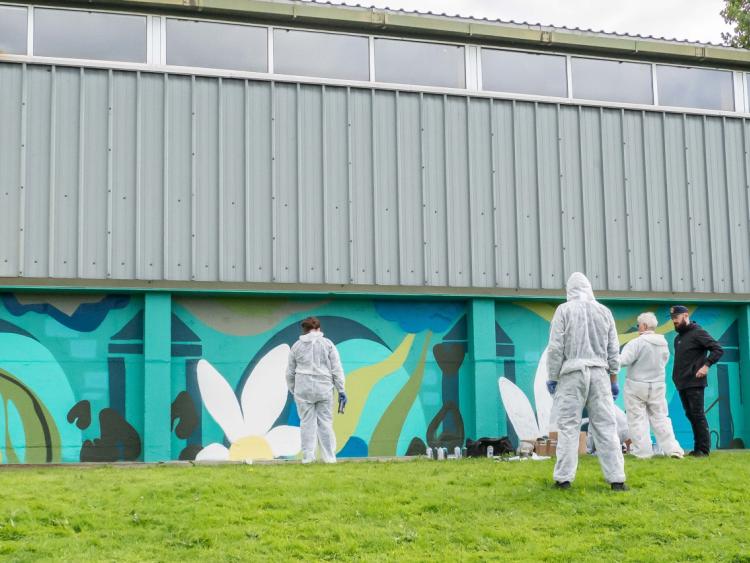 The mural was being painted yesterday

Kilkenny’s Peace Park is already looking a great deal brighter this week thanks to a new community-led street art project currently under way.

The Greensbridge250 group has teamed up with local young people and multi-disciplinary artist DanLeo to create something a little bit special for the area, calling the project 'Building Bridges'.

The result will be two new bright and colourful murals, designed by Dan, which will depict the historic bridge and some of the river’s natural flora and fauna. Both the side wall at the old swimming pool, and the wall coming into the Peace Park from Green’s Bridge are to get a full overhaul in striking, bold colours.

The youth volunteers got to work over the weekend laying a base layer of colour, before Dan arrived on Monday to offer direction and expertise to bring the first of two large pieces to life. The group braved the totally unpredictable weather of the past two days to get the paint on and dry before the heavens opened.

They were clearly enjoying themselves, getting a chance to learn a new skill under the supervision of an artist whose work has reinvigorated various locations in Kilkenny and further afield.

The idea for this particular project came from last year’s Greensbridge250 initiative, when a community group formed to mark the 250th anniversary of Green’s Bridge in 2016. Since then, the group has explored the idea of doing something in the Peace Park and at the old swimming pool building to improve the area and celebrate its history.

Following community meetings, they submitted an idea to KBC Bank’s Community Bright Ideas scheme, and managed to secure funding. They were then able to commission DanLeo to come up with some interesting designs hoping to reflect Green’s Bridge, its history and heritage. The plans received the backing of local councillors at a meeting last month.