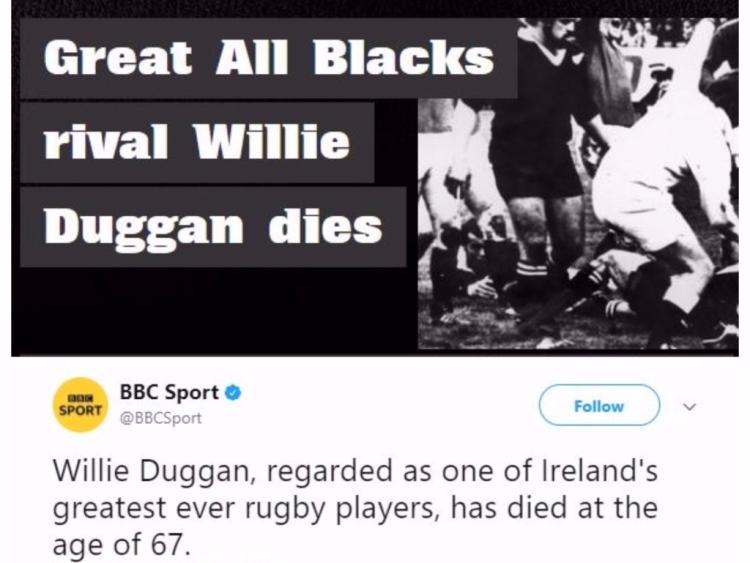 Coverage of the passing of Willie Duggan from the website www.allblacks.com and BBC Sport

There are few better measures of an athlete than the esteem in which he is held by his rivals - perhaps even more so than those who played on the same side.

Glowing tributes to the late Willie Duggan have been led here by those who played alongside him, or knew him best. However, this tribute to the teak-tough No 8, who died at his home in Kilkenny yesterday, from the official website of the mighty All Blacks, speaks volumes about the man.

The article describes Duggan as 'one of the most charismatic players to play for Ireland', and recalls a man 'who nearly scored what would have been a series-equalling try' for the 1977 British & Irish Lions in the fourth Test against the All Blacks at Eden Park.

The 1977 Lions tour to New Zealand is ranked among the best for those who remember it. Willie later rated the second Test of the series as one the most physical games of rugby he ever played.

"It is what I would call a good old-fashioned game of rugby where the referee didn't get involved," he famously quipped.

Meanwhile, funeral arrangements have been confirmed. A celebration of his life will take place at his home from 4pm to 8pm on Wednesday, and will continue on Thursday with Requiem Mass at 11am in St Mary's Cathedral followed by burial in St Kieran's Cemetery.