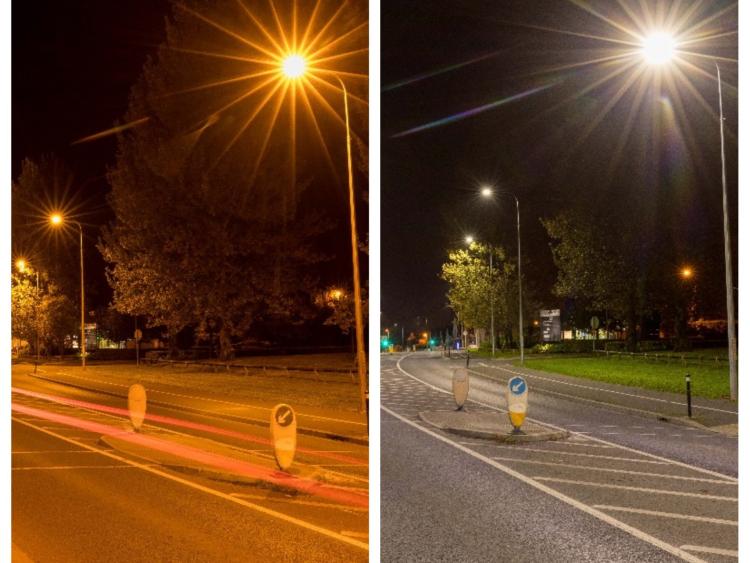 Before and after: The top shows the former orange lighting on the Old Dublin Road, while the bottom images shows the new LED lighting

Last week, Declan Keogh of the CKEA gave local councillors an update on how the project is progressing here. There are more than 10,000 streetlights owned and operated by Kilkenny County Council, and the project identified 1,300 of these. The contract was awarded in July and the LED lanterns were ordered.

“We are nearly completed now and it is one of the largest projects of its kind in Ireland,” Mr Keogh said.

The scheme has a number of benefits, including use of sustainable energy, reducing both crime and fear of crime, and requiring less maintenance (rather than every year, it will be around every six years). The lights also need less time to come on and off, coming on at 35 lux and turning off at 20 lux.

“They don’t need a ‘warming up’ period,” said Mr Keogh.

At the crux of the matter is that around 80 % of all currently-used street lighting lamps will be phased out by 2017, which means they will not be available for purchase. Refurbishment can significantly increase energy efficiency and reduce electricity and maintenance costs.

A lot of other routes in the county were ‘declassified’ when the motorways opened, paving the way for a new lighting system to be piloted. There are 29 locations across Kilkenny where this is in place, including an industrial estate, four housing estates, and various decommissioned routes, including Johnstown, Urlingford, Ballyhale, the Dublin Road, Castlecomer Road, Clara, and a number in Kilkenny City.

Cllr Maurice Shortall said that in one case he was aware of, the upgrading to LED had resulted in a ‘dark spot’ behind the light. Mr Keogh said in certain cases there may be an infill required.

Mr Keogh said there were substantial savings from the scheme, which were already there and would be felt in full next year.

The total project cost is €592,000 including design, VAT and project management fees. The grant amount expected is €195,000, and the annual electricity savings to the council is €100,000.