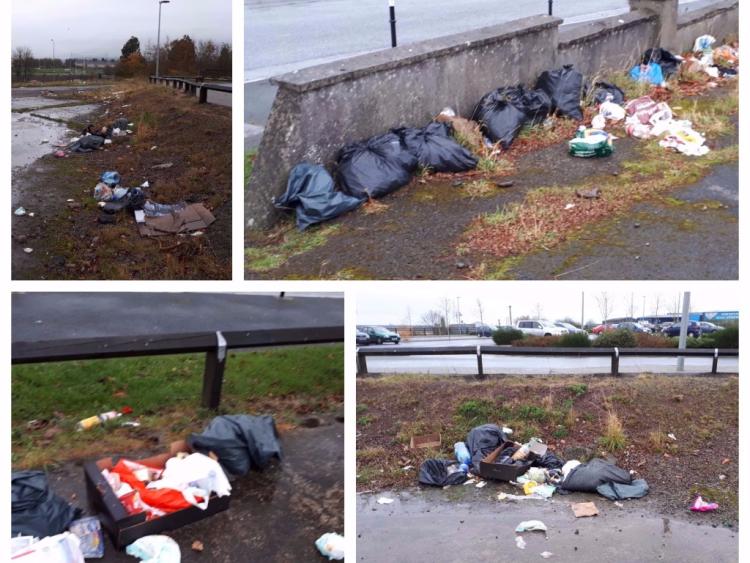 FILE: Bags of refuse and general rubbish litter the site at the Hebron Road in recent months

It’s hugely encouraging that after two successive reports in which Kilkenny fell down the rankings, we are back up near the top of the Irish Business Against Litter (IBAL) rankings this January.

Crucially, the An Taisce report had only good things to say about Kilkenny.

“Kilkenny continues to be a model for others to follow,” it noted. We scored highly not just in terms of absence of litter, but also for maintenance and general presentation.

This doesn’t happen by accident. Whether through the tireless efforts of volunteers such as members of Keep Kilkenny BeautifuL or the direct action of council staff or it is the result of a lot of hard work.

St Canice’s carpark — once identified by a report as a problem area for litter/dumping — saw the introduction of CCTV also.
The litter campaigns, the awareness and education drives, do appear to be working. What’s becoming clear however, is that — in the words of IBAL — ‘dumping has become the new litter’.

Illegal dumping is not just confined to the countryside. Our inner city streets — the wonderful, historic laneways of the city — were heavily targeted by fly tippers last year.

That practice has, in large part, been curtailed by the council putting its foot down. Covert CCTV cameras, followed by fines for offenders, seem to have had the desired effect. The lanes are looking much better in recent weeks.

However, at the recent IBAL event, a spokesperson warned again of the threat of increased illegal dumping as pay-byweight and heavier charges are introduced.

“Dumping is on the increase, and the more we ask people to pay for waste disposal the greater an issue it is likely to become,” said Conor Horgan of IBAL.

The business group concurs with the ‘polluter pays’ principle behind the mandatory pay-byweight collection system.
But how will that work, really?

As I went to bring my blue wheelie bin (dry mixed recyclables) out to the kerb last week, I opened the lid and had a glance to check how full it was.

What immediately caught my attention was that the surface layer of waste was not from my house. It included, along with a bag full of the wrappers of terrible food choices I would never make, a HSE-issued crutch. Some unfortunate individual has been waiting until I’m away or asleep, and sneaking their rubbish in. I suppose it’s marginally better than throwing it out into some field.

On Friday, several councillors raised the issue of household waste filling up public bins around the county. A former Mayor of Kilkenny, Patrick O' Neill, expressed frustration over how the street bins in Bennettsbridge were being abused by a few individuals.

There's no excuse for it. Recently, on local radio, another local councillor, Pat Fitzpatrick, lamented the amount of fly-tipping by the roadside and the ditches - even in close proximity to the local recycling facility at Dunmore.

Anyone who’s ever been out to Dunmore will know just how helpful and accommodating the staff are there. It’s a great facility and should be used more often.

The dumping doesn’t stop at a few bags and bits in city bins. As Darren Hassett writes on pg 11 of this week's Kilkenny People, entire vehicles are now being abandoned on people’s land. It’s hard to ask a landowner to pay to dispose of an unroadworthy car that just appears in their field one morning.

The council currently has its draft Litter Management Plan 2018-2020 out on public consultation. They’re seeking submissions from the community regarding what could be done better to improve litter control.

It covers the whole county and it’s a great opportunity for people to suggest what else could be done to encourage greater care for our environment. Public consultation runs until February 2, and you can get involved here.