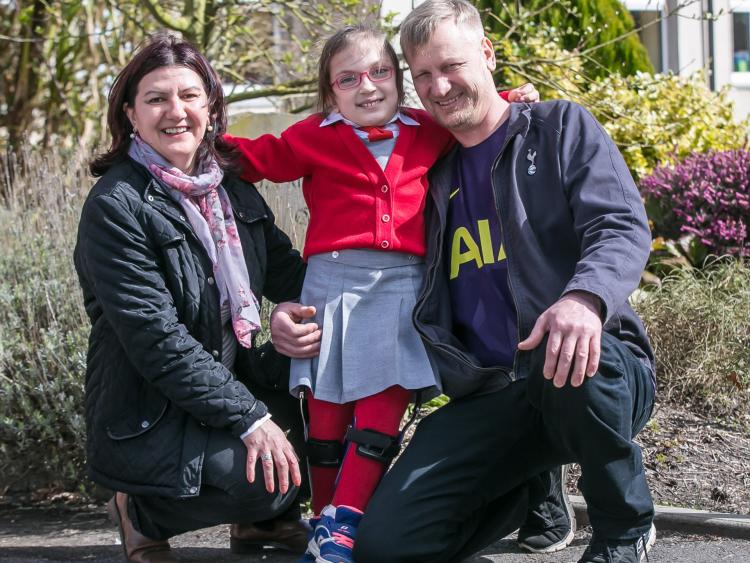 Cezy Fosca (12) with her parents Elena and Costel

After months of waiting finally the Fosca family were told that the drug their daughter so desperately needs is to be funded by the HSE.
Cezy Fosca (12) lives in Kilkenny City and has Morquio Syndrome - a degenerative condition affecting major organ systems. In 2011 Cezy was one of two children, included for trials for Vimizin - which is the only enzyme replacement therapy designed to target the underlying cause of this disease.
The Health Service Executive drugs group has previously denied a number of applications for reimbursement made by the manufacturer, Biomarin. On March 29 BioMarin has reached agreement with the HSE for the supply of Vimizim to Irish patients with Morquio A Syndrome.
In recent months Cezy had travelled to Leinster House and pleaded with the Minister for Health, Simon Harris. Taoiseach Leo Varadker also spoke on the matter in the Dáil.
Local TD, Bobby Alyward has campaigned tirelessly on Cezy’s behalf and raised the matter in Dáil Eireann on several occasions.
Elena told The Kilkenny People that she was contacted by a nurse from Temple Street Hospital over the Easter break to inform them that Cezy will be able to resume taking her medicine.
“We are very happy and very relieved that this is now over and Cezy can get her medicine. We want to thank people for their support and Deputy Bobby Alyward.
“Cezy will have to wait for a number of weeks before they can give her her medication and now she is feeling quite tired - you can see the effects of her off her medication,” her mother, Elena said.
The Kilkenny People has campaigned for Cezy to remain on the medication since first highlighting the case last November.
BioMarin have informed the Fosca family that they expect that Vimizim will be available and reimbursed immediately, subject to the conclusion of contract negotiations, the finalisation of logistical arrangements, and the completion of approval processes.
The manufacturers BioMarin have stated: “This is a transformative and innovative agreement, which recognises both the burden of this disease in Ireland and our need to continue investing in the search for new medicines. BioMarin will now work with the HSE move quickly so that Irish patients can join those patients around the world who already have access to Vimizim.”
Deputy Aylward stated: "I am so delighted for the Fosca family and for all of the patients in Ireland that can now look forward to a much improved quality of life following the approval of this drug.
“Cezy Fosca has battled bravely to lead a robust and fun-filled life despite this challenging medical condition and she and her family can now look to the future with renewed positivity and hope."