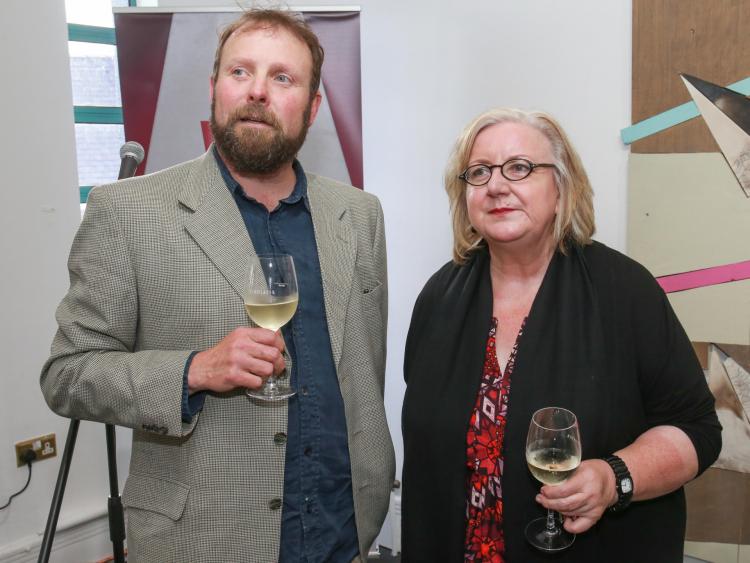 Larry Fogg and Anna O'Sullivan during the launch of the Autumn Winter programme in the Watergate Theatre PICTURE: PAT MOORE

An innovative Autumn/Winter programme of theatre, music and literature was launched on Friday evening.
Members of the local arts community, along with public representatives and community leaders gathered for the launch which also coincided with the opening of Micro/Macro, an exhibition of visual art by Larry Fogg and Liselott Olofsson.
Mayor of Kilkenny, Cllr Peter Chap Cleere remarked that ‘Kilkenny has built a reputation as a place where arts flourish and the Watergate Theatre has contributed immensely to the building of this reputation over the years’.
“Kilkenny County Council and the former Kilkenny Borough Council has been a financial supporter of the Watergate Theatre for a number of years and I wish to acknowledge and commend the bravery of the elected members of both councils in the allocation of funding to the Theatre during difficult times.
The Mayor also commended on continuing to maintain high programming standards.
“The Watergate Theatre has managed to not only stay afloat through the cuts of the more recent austere times, but to continue their programme of quality productions demonstrating that the arts is open to everyone and can have a deep impact for making positive change in the lives of people,” he added.
For more on the Watergate Theatre see www.watergatetheatre.com