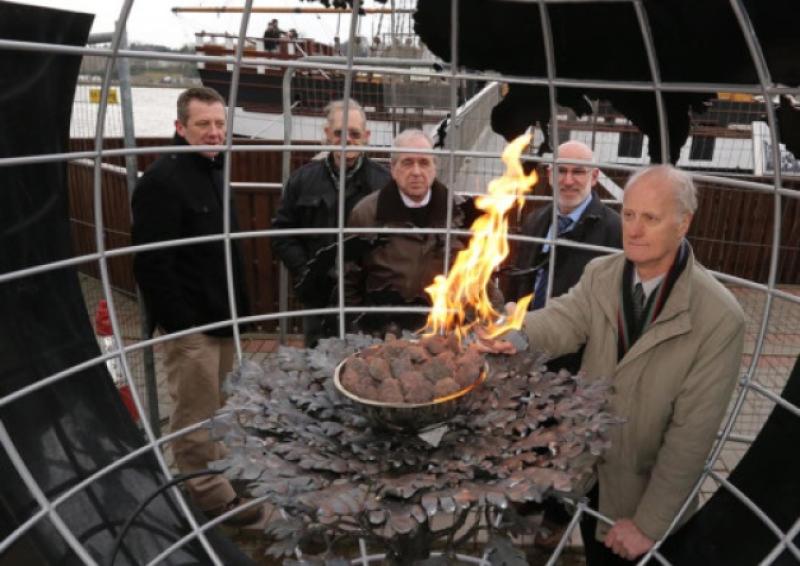 Plans are already in the advanced stages in New Ross for the JFK50 celebrations, which will see a series of highlight events to celebrate the fiftieth anniversary of the visit of President John F Kennedy to his ancestral home.

Plans are already in the advanced stages in New Ross for the JFK50 celebrations, which will see a series of highlight events to celebrate the fiftieth anniversary of the visit of President John F Kennedy to his ancestral home.

Organisers of one of the biggest festivals in Ireland this year announce that. The JFK50 Homecoming events will take place in America, Liverpool and New Ross from May 29 to June 22 this year.

The technology specialists behind the London 2012 Olympic Torch arrived in the town this week to work on perfecting the flame equipment for the newly built ‘Emigrant Flame’. This is to be lit by members of the Kennedy Family and Taoiseach Enda Kenny on June 22 at New Ross Quayside.

The first event of the JFK50 will take place on May 29, when a flame will be taken from the ‘Eternal Flame’ that burns in Arlington National Cemetery at the graveside of President Kennedy.

Birmingham-based Bullfinch Ltd – whose engineers developed the burner system for the London 2012 Olympic torch, the gas beacons on Hadrian’s Wall and the 600 beacons used for Queen Elizabeth’s Diamond Jubilee celebrations – have now created the ‘The Gathering Torch’ burner. The Gathering Torch will take the flame from the Kennedy Memorial in Arlington Cemetery from where it will then travel to New Ross via Boston and Liverpool, the journey in reverse taken by Patrick Kennedy, the president’s great grandfather, in 1848.

The Irish Naval Service patrol vessel, the LE Niamh, will take the flame to Liverpool on June 18 remaining in position on Liverpool quayside until June 20. The LE Niamh will then set sail for New Ross and on route the flame will transfer to the patrol vessel the LE Orla and will travel up the River Barrow arriving alongside in New Ross on June 21. The LE Orla will remain in New Ross until Sunday, June 23, playing a major role in the lighting ceremony of the Emigrant Flame.

“All of the works are well underway on the re-development of the quayside in New Ross Town and elsewhere for the events due to take place on June 22,” said New Ross town manager Eamonn Hore.

“We are looking forward to unveiling the finished works and having the Taoiseach officially attend the JFK50 celebratory events on the June 22 and to see the Emigrant Flame set alight as a permanent memorial to all those who have left these shores and become part of Ireland’s emigrant family.

“I would like to commend the work of my colleagues, the JFK50 Committee, the various government departments, Fáilte Ireland and the voluntary committees for all of the hard work being put in to ensure that this summer will again be one to remember in another 50 years and to honour and celebrate the memory of the Kennedy’s and our strong links with Irish America.”

“It is designed to fit in well with the wonderful new quayside development in New Ross,” he said.

“Again the challenge has been to provide a good-sized stable flame. It has a sophisticated control mechanism to ensure it burns safely, and extensive testing is underway to ensure that it is stable and will not go out, even under the most extreme weather conditions.

“It is a privilege to have been given the opportunity to design and make the JFK50 Emigrant Flame and Gathering Torches and we are using all our expertise to make our part a success.”

The JFK50 celebratory events take place in New Ross on June 22, when An Taoiseach Enda Kenny along with members of the Kennedy family, including Caroline Kennedy and Jean Kennedy Smith, will set alight the Emigrant Flame. An Taoiseach will officially open the re-developed Kennedy Homestead, and plant a tree at the soon to be re-named JFK Memorial Park.

Visitors are invited to the town to join in the celebrations and enjoy the JFK50 Homecoming Parade, the outdoor staging of music, drama and entertainment and the lighting of the Emigrant Flame. For further details on the JFK50 events see www.jfk50ireland.com.