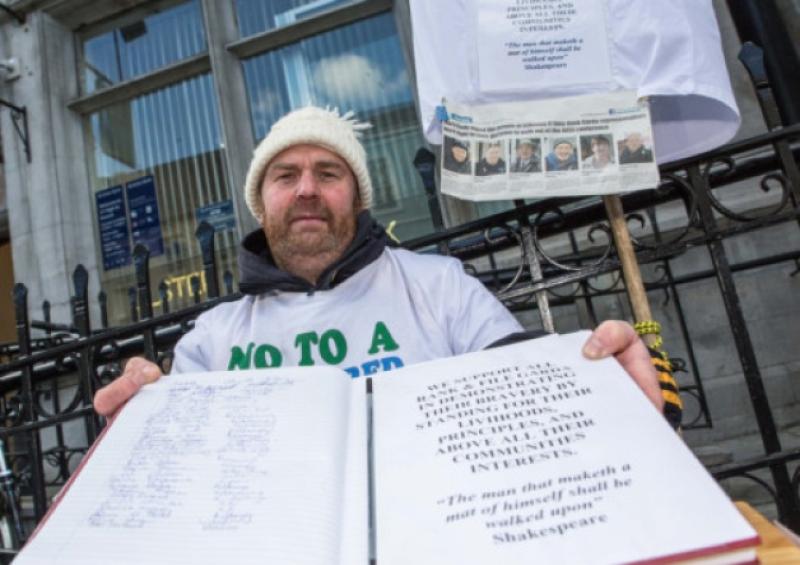 A KILKENNY activist has already collected 2,000 signatures from members of the public in support of rank and file Gardai, having maintained a solo demonstration and petition on High Street since Saturday.

A KILKENNY activist has already collected 2,000 signatures from members of the public in support of rank and file Gardai, having maintained a solo demonstration and petition on High Street since Saturday.

Jim Delaney, from Loreto Avenue in the city, has been standing opposite City Hall for hours everyday since the weekend. Armed with nothing more than a sign, a pen, two journals, and a copy of the Kilkenny People, he has seen an almost universal support for his cause.

His message is simple: Allow the Gardai to represent and defend their interests, lift the recruitment embargo, and let more Gardai get back on the beat. He also says that a number of Gardai have privately expressed support for his campaign.

“I’m in support of the Gardai,” he says.

“As a citizen of Kilkenny, I am in sympathy with the four guards who walked out, as well as in general. The laws are too old for a modern democracy; they should be allowed to protest and to speak in union talks.”

The declaration of Jim’s petition reads: ‘We support the rank and file Gardai in demonstrating their bravery by standing for their livelihoods, principles, and above all, their communities’ interests’.

His intention now is to continue the petition until the Garda Representative Association annual conference at the end of this month. At that point, he will send one journal of signatures to the conference, and bring the other to Dublin to give to Minister for Justice Alan Shatter.

“I have no faith at all in him,” said Jim, who wears a t-shirt reading ‘No to a Shattered Society’.

“There’s very little support for him out there.”

Jim says that in the six days he has been on High Street, he has met just seven people who have opposed his aims – but he is happy to listen to every opinion offered. His petition continues, across the road from Kilkenny’s City Hall.