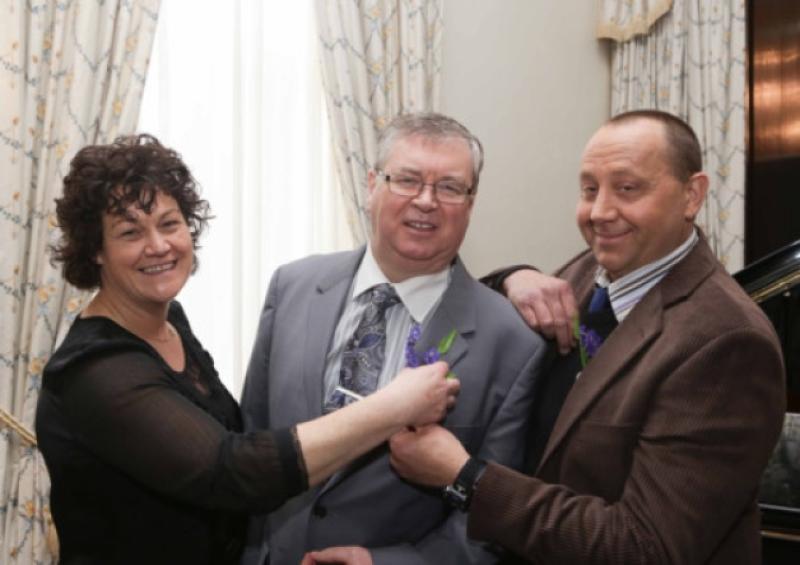 A local man was on hand to highlight the importance of organ donation and launch Organ Donor Awareness Week in Dublin last week.

A local man was on hand to highlight the importance of organ donation and launch Organ Donor Awareness Week in Dublin last week.

Seamus Carrigan (45) from Burnchurch Viper, Kells in Kilkenny is secretary of the Kilkenny branch of the IKA. He has been receiving dialysis treatment for over six years, having gone into renal failure in his late 20s, and at the age of 29 received a kidney transplant.

This lasted for nine years, but his kidney function declined gradually in the four years prior to him having to commence dialysis treatment. For the first three years, he underwent hospital-based haemodialysis at different hospitals including Tallaght, Beaumont and the Wellstone in Kilkenny. Then, three years ago he was one of the first people to commence a relatively new form of dialysis treatment in Ireland called home-haemodialysis which has been working well for him.

Under the care of consultant nephrologist Sean Leavy at Waterford Regional Hospital, he will be one of the first patients in Ireland to undergo a ‘Rolls Royce’ treatment called Nocturnal Dialysis.

Seamus is married to Arlene and they have four children. Their children range in age from eight to 16, and for most of their lives they have known their father as a dialysis patient.

Seamus says that because he has a build 100% anti-bodies in his body, it makes finding a suitable donor kidney transplant difficult to secure in Ireland (a small country). He and his wife, Arlene, and her brother, Donal, have entered a Paired Exchange Programme between Beaumont Hospital and the UK.

This is where willing donors swap organs in the hope that their loved ones will benefit if a suitable organ becomes available. With just two more tests to undergo at Beaumont Hospital, they will then travel to Bristol and be entered in this transplant pool.

Seamus says that because of his anti-body build-up, he only has a 10% chance of a suitable donor kidney becoming available. Arlene and her brother Donal strongly believe that this is the path they must take and Donal is happy to do it for purely altruistic reasons.

Donal plans to give up his job as a store manager in order to take time to undergo his living kidney donation and after recuperating, he plans to travel to work as a volunteer in Haiti for a few years.

A trend of large fluctuations in Irish donation figures from year to year was highlighted by the Irish Kidney Association at the national launch of Organ Donor Awareness Week in Dublin last week. While 2010 was almost a record low for organ donation, 2011 was a record high.

Last year, at 17% less than the previous year, was below average. The Irish Kidney Association chief executive Mark Murphy said he didn’t know of another European country with such wide swings in deceased donor activity.

“Unless the required infrastructure and funding is implemented in the Republic, the Organ Donor Consent issue is irrelevant at this time as there is much more to do here before such deliberations take place,” he said.

Attending the launch was RTE Liveline presenter Joe Duffy who, for the third year in a row, is fronting campaign, which aims to increase the number of organ donors. The annual organ donor awareness campaign is organised by the Irish Kidney Association and supported by the Irish Donor Network.

Mr Murphy said the willingness of the Irish public to donate was not the problem when it comes to organ donation.

“It is the lack of the required infrastructure, an organ donor registry and the employment of fully trained organ donor coordinators in all our hospitals,” he said.

“This is proven by the top 10 European donating countries that have identified and invested in infrastructure to achieve 30 donors per million of population (pmp) successfully and affordably.”

“The Irish public should not be misled that the proposed change in the name of the consent system from ‘informed consent’ (opt in) to ‘presumed consent’ (opt out) would increase our current rate in organ donation from its current 20 per million of population (pmp). Nowhere in Europe does ‘presumed consent’ actually take place in practice. Regardless of legislation, they all have come to realise it is not a practical system. The relatives are always consulted and can veto any organ donation process.”

“Living donation needs to remain complimentary to deceased donation – not its replacement.”

Organ Donor Awareness Week also serves as a fundraising exercise for the Irish Kidney Association. Throughout this week (March 30 – April 6), volunteers will be out on the streets, and in shopping centres, selling ‘forget me not flower’ emblems, brooches, pens and shopping trolley discs.

All proceeds will go towards the Irish Kidney Association’s aid for patients on dialysis and those patients fortunate enough to have received a kidney transplant.

Organ Donor Cards can also be obtained by phoning the Irish Kidney Association, LoCall 1890 543639 or Freetext the word DONOR to 50050. Visit website www.ika.ie.

It is also now possible to store an organ donor card, the ‘ecard’, on Smart mobile phones. Simply search for ‘Donor ECard’ at the IPhone Store or Android Market Place.