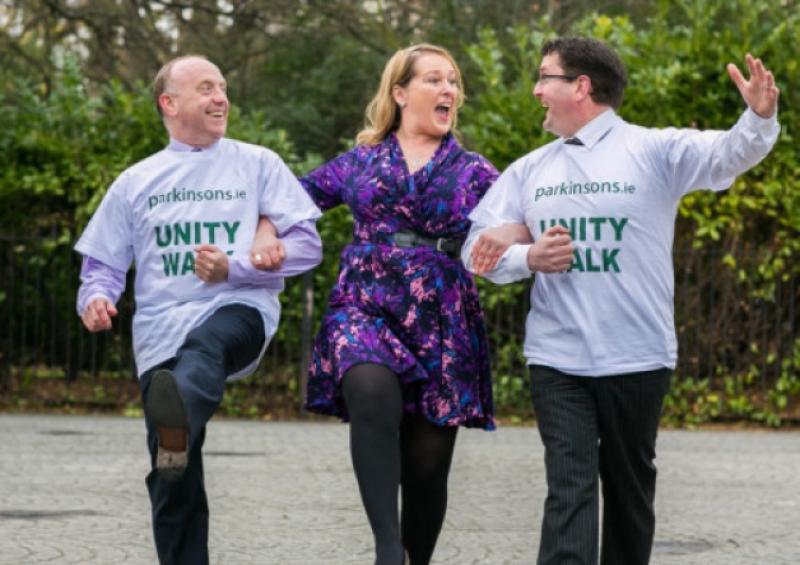 Ireland’s leading lady of comedy Katherine Lynch has expressed her hope that the upcoming World Parkinson’s Awareness Day becomes a line in the sand for growing awareness and much needed services for one of Ireland’s fastest growing diseases.

Ireland’s leading lady of comedy Katherine Lynch has expressed her hope that the upcoming World Parkinson’s Awareness Day becomes a line in the sand for growing awareness and much needed services for one of Ireland’s fastest growing diseases.

Entire regions have no nurse specialist, including the South East, which is one of the regions being prioritised by the PAI for a Parkinson’s NS. At present nurse specialists are only available in Dublin (three), Galway and Limerick.

Launching the Parkinson’s Association of Ireland’s ‘Unity Walk’, which will take place from Merrion Square to St. Stephen’s Green on Thursday week, April 11t to mark World Parkinson’s Awareness Day, Ms Lynch said that there is a grave need for Ireland to begin understanding Parkinson’s and delivering the type of services needed.

Ireland currently has 8,000 plus people with Parkinson’s, the degenerative neurological disease, and incidence levels are expected to double in the next 20 years due to our ageing demographic. However, services in Ireland have already fallen way behind best international standards across a range of areas, not least in terms of the number of neurologists and, particularly, nurse specialists we have.

Said Katherine: “Experts tell us that we are going to have to get ready in Ireland for a big increase in Parkinson’s over the coming years. Parkinson’s can have a huge impact on a person’s life and for their family but with the right treatment and services, it can be made so much easier.

“We were quite fortunate in that my mother and sister are both nurses so my father had the best possible care as he got older. That made a huge difference to his quality of life. But others don’t have that support and I cannot imagine how hard it is for them.”

With the HSE recruitment moratorium still in place, it is left to the voluntary sector - led by the Parkinson’s Association of Ireland (PAI) at national and local level, supported by pharmaceutical companies, consultants and people with Parkinson’s and their families - to try and raise funds to hire additional nurse specialists and provide other supports currently lacking.

The PAI’s Unity Walk – supported by Lundbeck Ireland Ltd , a pharmaceutical company highly committed to improving the quality of life of people living with brain diseases – is the launch of a campaign by the PAI to raise awareness of the disease and funds for services.

Up to 200 people with Parkinson’s, as well as friends and family, are expected to participate in the short walk, which will culminate with the planting of an Aspen Tree – the leaf of which is the PAI symbol. Other events are taking place across the country to mark World Parkinson’s Awareness Day.

Participants are asked to pre-register by emailing info@parkinsons.ie or by telephone (01-8722234).