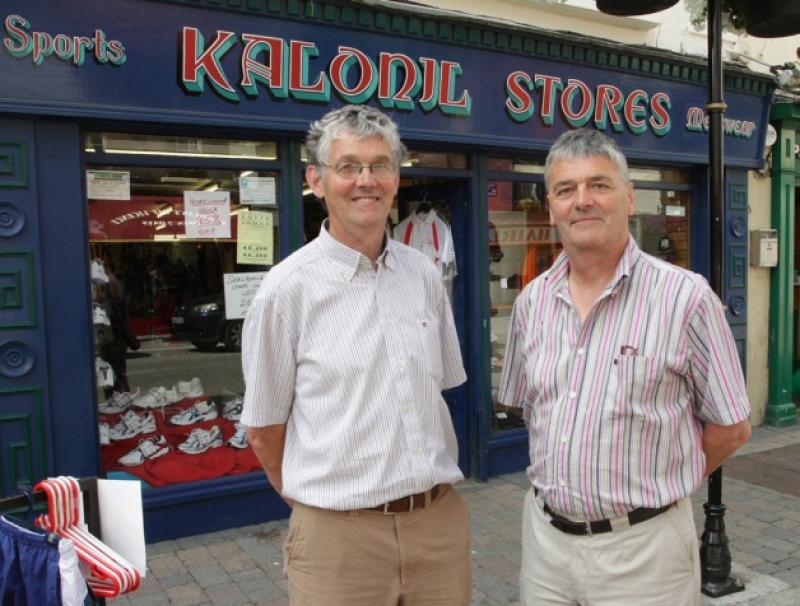 A well-known family business that supplied Kilkenny with drapery and menswear for generations is closing its doors for the final time, a victim of the changing times.

A well-known family business that supplied Kilkenny with drapery and menswear for generations is closing its doors for the final time, a victim of the changing times.

Kalonil Stores was established in 1946 when Ned Walsh from Grange, the Rower, purchased 14 Quay Street, New Ross. A household name, the business had customers from Bennettsbridge to Mullinavat, and traded with Duggans Wholesale and Padmore and Barnes.

They had a tailor who would drive from Kilkenny five days a week in the 1950s and 1960s, and there’s no doubt that many of our readers will remember him. In a green Bedford van, a tailor would travel for miles around – to Adamstown, Clonroche, St Mullin’s, Ballymurphy, Graignamanagh, Thomastown, Slieverue, Mullinavat and Glenmore.

Kalonil Stores was mainly as a menswear shop, but also sold beds, bedding, floor covering, footwear, haberdashery and it had a licensed bar. But Ned did not like the bar trade, and sold the licence. That was joined with another local business to become a full licence for The Viking Lounge and  Bar.

In the early 1960s, Ned started selling second-hand furniture in John Street (now Tony Breen’s Curtain Shop) and in Charles Street, and so needed extra assistance in the menswear shop. His son, Tom, started serving his apprenticeship in the late 1960s, and took over the business in 1974. Tom continued there until his retirement in 2010, when his brother, Eamonn, took over duties.

Renovations took place at the drapery store in 1977 and Tom opened a sports department upstairs. It was opened by Olympian Eamonn Coughlan, and the day is still remembered for the excitement it caused in the town and surrounding area.

Business continued, and by 1990, Eamonn decided to leave the furniture business, and took over the sports department. He traded until 2004 when he sold the premises to the bookmakers Paddy Power.

He moved upstairs over the menswear shop at Kalonil Stores and it is there to the present day. Tom and Eamonn’s sisters, Marainne, Margaret and Bride all spent time behind the counter helping out in the shop, with Bride spending the last 20 years in the sports and school departments.

However, it seems the next generation of the family have chosen different career paths, and the life and times of Kalonil Stores has now come to an end.

The family would like to thank all the staff who worked with them during the many years.

“Their dedication and loyalty is very much appreciated,” says Tom Walsh.

“Of course, Kalonil Stores would not survive without our good customers and we had many. Over the years through tough times and good times our customers showed great loyalty and we feel that this loyalty is the healthy heartbeat of any provincial town. Sincere thanks to you all.”