Ostrich chick hatches in Kilkenny for the first time 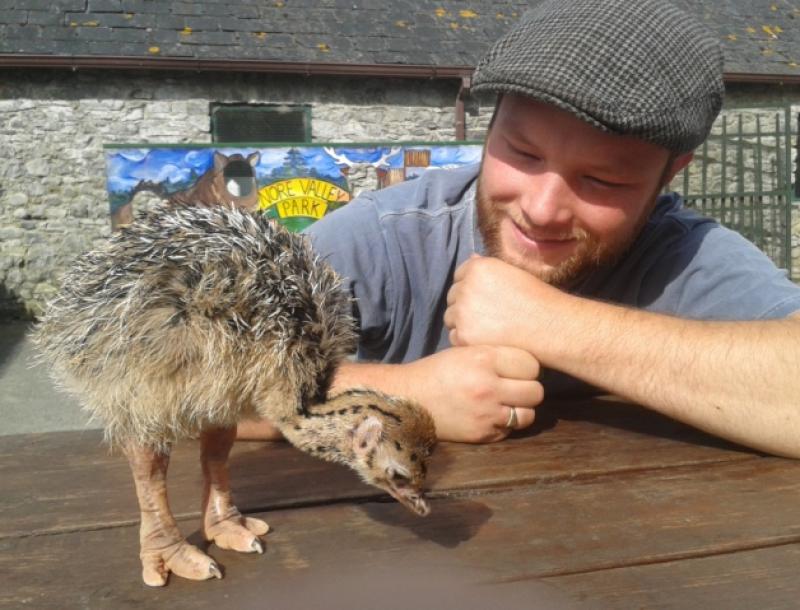 An African ostrich has been born in Kilkenny for the first time ever.

An African ostrich has been born in Kilkenny for the first time ever.

The hen-sized chick was hatched at Nore Valley Park Open Farm in Bennettsbridge, following weeks of hard work by staff. The two resident African ostriches at the park, Oggy and Olivia, have become proud parents for the first time.

Ostriches are notoriously difficult to breed successfully, particularly in a country such as Ireland where the climate is a far cry from their native sub-Saharan Africa. The ostriches have laid fertile eggs before in their eight years here, but unfortunately none of the eggs hatched despite the mother’s best effort.

This time, Gareth Alcorn – nephew of Samuel and Isobel Harper – placed six eggs in an incubator, and and after weeks of monitoring and adjusting, he has hatched a healthy and active chick. Now, one of the other eggs has shown signs of growth, and with some luck, Gareth reckons there may be another ostrich on the way.

Samuel and Isobel Harper established the popular caravan park and farm in 1989 and have been attracting families and school groups year after year with their home baked goods, energising activities and extensive facilities. The farm has proven to be particularly popular this season due to the recent addition of Diva, the six-week-old red deer fawn, which has been hand-reared at the farm.

She can be bottle fed by children three times daily, along with goat kids and lambs. The ostrich chick only hatched on Sunday morning and has already drawn interest from far and wide.

Gareth is keen for as many as possible to come and see the ostrich chick before the season ends due to the rarity of such an occurrence in Kilkenny. Ostrich farms, although present in Ireland, are not well known and having a newborn chick so close to the city is something he wants to share with as many as possible.

“It has been a very busy season for us here at Nore Valley Park and we are absolutely delighted that Oggy and Olivia have become parents,” he said.

“We haven’t a name for the chick yet so we are encouraging our visitors to suggest names in a competition we are running on Facebook. Simply go to www.facebook.com/norevalleypark and offer your suggestion for a chance to win a season pass to the farm.”

Nore Valley Park will remain open for campers and the public until October 31, when a special event will round off the end of the season. The farm is open for day visitors six days a week from 9am to 8pm, and is closed on Sundays. Bottle-feeding of lambs, goat kids and Diva the fawn are at 9am, 2pm and 7pm daily.