Kilkenny racquetball is on show with launch of the SE League 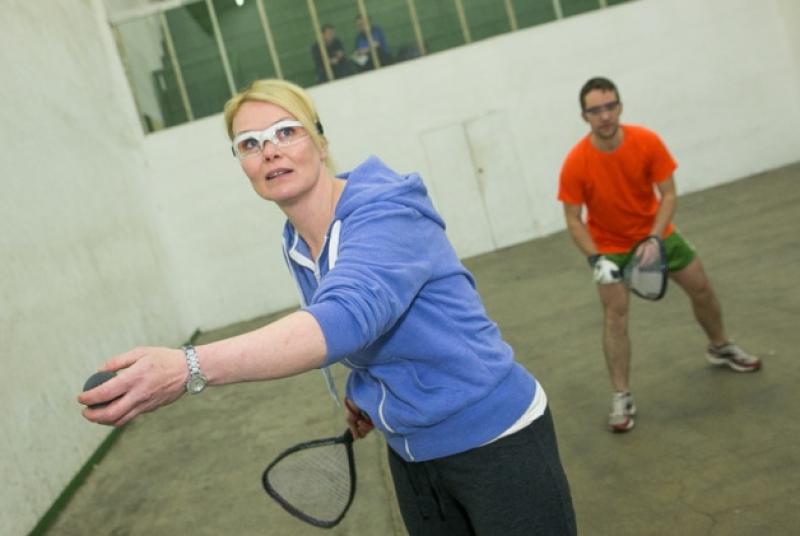 As the nights close in and the air becomes cooler, the racquetball season gets into full swing ahead of the first weekend of the South East League.

As the nights close in and the air becomes cooler, the racquetball season gets into full swing ahead of the first weekend of the South East League.

Talbots Inch will host the opening games of the league this weekend, which aims to attract established and new players to the sport. Kilkenny has a strong club base to build on and is also home to a European champion, with Muckalee’s Mark Murphy winning Gold as part of the Irish team at the championships in Bergamo, Italy, in July.

There are large numbers playing the sport every week at clubs in Clogh, Muckalee, Mothel, O’Loughlin’s, Callan and Galmoy but there is one problem.

Eamonn Buggy, treasurer of the Racquetball Association of Ireland and Muckalee clubman, says that Kilkenny players don’t realise the potential they have.

“Last year there were only three of us travelling to competitions- myself, Mark Murphy and Podge Dowd. There’s so many playing, we can’t get them to travel to competitions. The aim of this is to improve the knowledge of the sport with people and get more playing.

“Locally, there is a huge amount of people playing. For example, there is nearly 200 people playing in Clogh and Mothel but most won’t travel to the national competitions. Local fellas don’t realise how good they are. If they did travel, they’d be as good as anybody if they did the training”, explained Eamonn.

The Southeast League will see competitors divided into groups of eight and it will be €10 each to play. All games will be played Monday to Saturday weekly with the opening games coming up this Saturday. “We will know all the players and grade them accordingly- the eight top players in Group One, the next eight lesser players in Group Two and so on. We hope to have enough to set up a women’s group. If there is not enough, the women will have to mix in with the men. But that’s no problem because the likes of Iris are as good as most men,” said Eamonn.

Iris O’Flynn, Mothel Racquetball Club, only started playing the sport four years ago and explained why the sport attracted her. “It was only up the road. It was something new and it was a bit of exercise,

“Things can get very competitive. When you are on that court you want to win but at the same time you don’t mind losing once it’s a good game,” Iris commented.

She said that the founding of a Southeast League is a bonus for the players in Kilkenny. “It’s great because you’ll meet new players. For me, being a woman, I don’t know of many women involved apart from two or three others in the local community.”

The sport is played in the same manner as Handball, but racquets are used to hit the slightly tougher rubber ball. Games are the best of three sets with 15 points needed to win a set. Games are played in 40x20 and 60x30 courts with the object of the game simply to hit the ball off any part of the wall with the aim of getting it to bounce twice before the opponent can return it.

Racquetball has some distinct differences from it’s cousin sport- squash. The racquets used in squash are larger but the balls are smaller and softer leading to longer rallies as they cannot be hit as hard.

When asked what skills are most important in the sport, Eamonn says, “It’s definitely not speed, strangely enough. It is definitely the brain. You always have to be a step ahead of your opponent- let’s say if he is lining up a certain way, you have to be aware of where he is hitting the ball. If you can do that well, it gives you a great advantage. I suppose court position is the key when playing.”

For Galmoy clubman, Barry Kavanagh, the skills required are “speed, fitness, accuracy. It’s a great workout. For someone my weight, you lose close to 500 calories in one hour.”

“It comes from the GAA, I suppose. You find that everybody playing 60x30 are former hurlers or still involved in the GAA. It does definitely have an impact, due to the importance of hand-eye co-ordination in the two sports,” he explained.

Eamonn’s involvement in the sport started from a common source. “My father. I used to go down with my father to local competitions when I was six or seven and I would be watching my father playing. And you’d love to be playing, and going in between games and you’d be ‘bating’ the ball off the wall. And then your father would be bringing you down every Saturday and Sunday and you’d be tipping away like that. I just started playing then in the local competitions, then national competitions and that was it,” said Eamonn.

Like many sports in Ireland, revenue is required to sustain it, but it can be difficult to acquire. “It (racquetball) gets funding each year from the Sports Council. It isn’t a huge amount but just enough to keep the association going. The only way that clubs make money is through membership. The Racquetball Association of Ireland would get funding to sponsor teams going to Europe or international competitions however”, Eamonn explained.

Some clubs in the county are thriving. Galmoy have recently joined the Racquetball Association of Ireland and are running leagues on a regular basis, such is the demand for competition from its members.

“The likes of Jerry Drennan have done an absolute mountain of work in Galmoy. He’s the linchpin of the club and I reckon that our club will have a string of champions over the next few years, all thanks to Jerry,” said Barry Kavanagh, Galmoy clubman.

Along with the success of Kilkenny’s Mark Murphy, the county is also home to the All Ireland 60x30 Ladies Doubles champions- Danielle and Edel Coonan. The best racquetball player in Europe is also an Irishman- Noel O’Callaghan of Cork.

The short term aim for Kilkenny racquetball remains very simple for Eamonn. “The trouble is to get local players travelling to national events. That is the aim at the moment.”

Anybody wishing to join the Southeast League still has the chance to do so before play gets underway this weekend at Talbots Inch handball club. Those interested can contact Eamonn Buggy on 086 1789185 or e-mail ebugs@eircom.net.