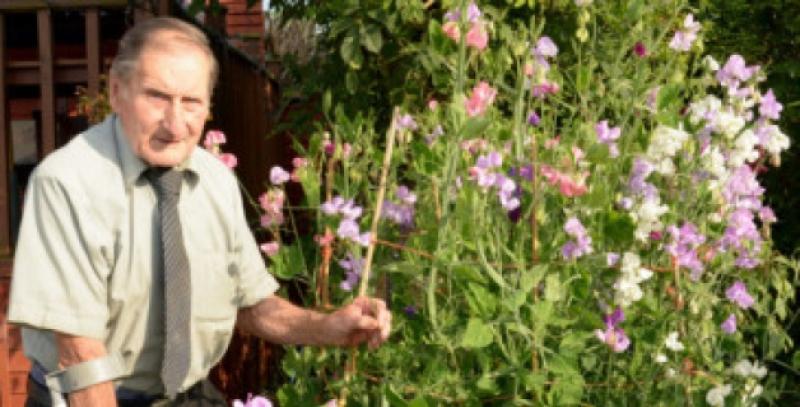 He will be one of the oldest exhibitors at the Iverk Show on Saturday, August 23 but at 84 years of age, Tom O’Reilly, Oldcourt, Piltown, has no intention of stopping any time soon.

He will be one of the oldest exhibitors at the Iverk Show on Saturday, August 23 but at 84 years of age, Tom O’Reilly, Oldcourt, Piltown, has no intention of stopping any time soon.

He started showing vegetables in the mid 1950s when the Iverk Show was held in the grounds of Kildalton College.

He is preparing 40 to 50 entries for this year with his granddaughter Becky. Nowadays Tom shows vegetables, fruit and flowers. Years ago he also showed eggs.

Tom was born in Inistioge where his father was a Garda. His father was transferred to Piltown in 1946 when Tom was 16 years. When Tom married his late wife Kitty Hayes they lived in the gate lodge in Kildalton before moving to Hillcrest in 1969. The third in his family Tom had two brothers and three sisters.

After his apprenticeship with the Oblates Tom and his late brother Anthony began growing vegetables commercially. Now with his son John he continues to do so.

“I love the showing” he said. “One is always striving to do better and be the best in the show. I won the prestigious Mr Congreve Cup outright having won it four years on the trot. I also won the replacement Congreve Cup outright. I have won more with onions than any other vegetable.”

As well as showing in Iverk Tom also showed at Clonmel, Waterford and Tramore. His best placing in an All Ireland competition was fourth.

As Tom is not as mobile as he used to be Becky is a great help. “I love it; it’s great; the competition in the show is fantastic. We are always trying to win and we grow especially for the show,’”she said. “I hope to go to college this year but that won’t stop me helping Granddad and Dad prepare for Iverk”

We would love to win the Duggan Cup this year they agreed. We have not won it for the past four years. Our Sweet Pea and Sun Flowers are looking particular good.

For the future Tom says “I would to see the tomato class divided into cherry, normal and beef as it would be fairer. I would also like to see the prize money increased in line with other sections in the show.”

The novelty vegetable classes are usually well supported. Last year’s largest pumpkin weighted about 40 Kgs. Can anyone beat that this year?

As well as the fruit, flower and vegetable classes there are honey classes and the new flower arranging section. There is the new junior baking section supporting the usual adult classes including the great cherry cake competition. The food hall will be bigger and better and is sponsored by Hickson’s Centra in Piltown

The closing date for entries is Friday, August 15. Details of all classes and entry forms can be found on www.iverkshow.ie