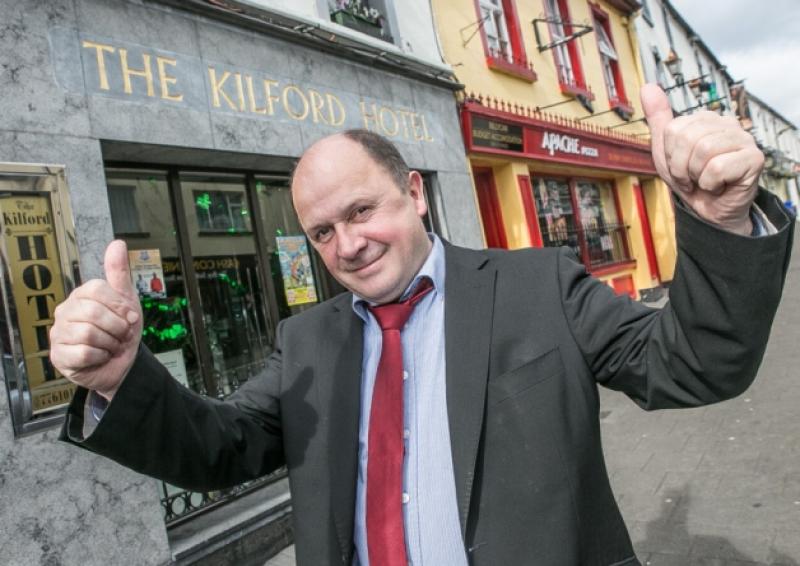 That’s because the seven year old was bred by Kilford Hotel and O’Faolain’s night club proprietor, Pius Phelan and his brother Tom in their home place, set amid the rolling countryside of Tullahought.

Many people on the street and vicinity were on the horse at odds of 12 to 1 before the race and a number of local betting offices had a day to forget because of the horse’s exploits on the famed Cotswolds course.

However the joyous occasion was tinged with sadness. Although popular Pius sold the gelding for a six figure sum to English trainer, Rebecca Curtis a few years ago, the dam (mother) of O’Faolain’s Boy, the very impressive Lisa’s Storm died giving birth to the chaser which has already been installed as third favourite for next year’s Cheltenham Gold Cup, the blue riband of jump racing.

Pius has mixed feelings about selling him and realises that if Lisa’s Storm had lived, the other offspring from her would have sold for a lot more than he received for O’Faolain’s Boy but mostly he is thrilled that he and his family bred such an animal.

And he recalled fondly O’Faolain’s Boy first run under Tullahought resident, Trevor Horgan in a point-to-point three years ago.

The horse had been initially quoted at odds of 33/1 for the race and Pius had a “few bob” on him at that price.