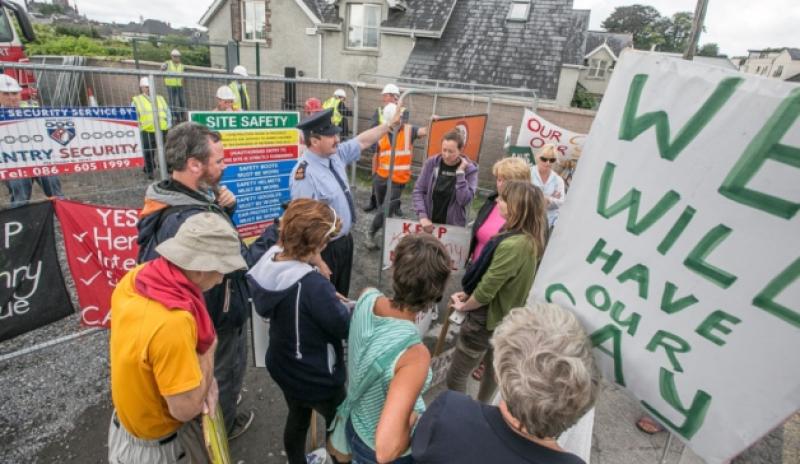 Up to 15 gardai were deployed at Greens Bridge this morning to allow trucks to pass into the site where a controversial new bridge is being built.

Up to 15 gardai were deployed at Greens Bridge this morning to allow trucks to pass into the site where a controversial new bridge is being built.

Shortly after 8am this morning the bridge was cordoned off to allow trucks access to the site. Gardai from the region asked a small number of protesters at the picket to allow the trucks in.

Private security staff employed by contractors were also present at the site.

Superintendent Padraig Dunne spoke with protesters, some of whom were visibly upset.

Protester Darragh Byrne said that when he arrived at the site there were 15 gardai present telling protesters that they had to move.

“People said that they had a reasonable right to be there and the police walked towards them and cordoned off the entrance and physically moved people away.

“They moved in two trucks of circular piles and an oil truck to feed the pile driver,” he said.

“I feel really disappointed that the police were brought into an issue with a private contractor. It was very upsetting to watch and it is an awful waste of taxpayers money.”

Helena Duggan explained that when she arrived that ‘gardai were linked across the road blocking the people from the site entrance’.

She said that she walked across the picket and stood in front of the truck and was physically moved away by gardai.

Lucy Glendinnig said that she had ‘a reasonable right’ to be at the site and was physically moved away by gardai.