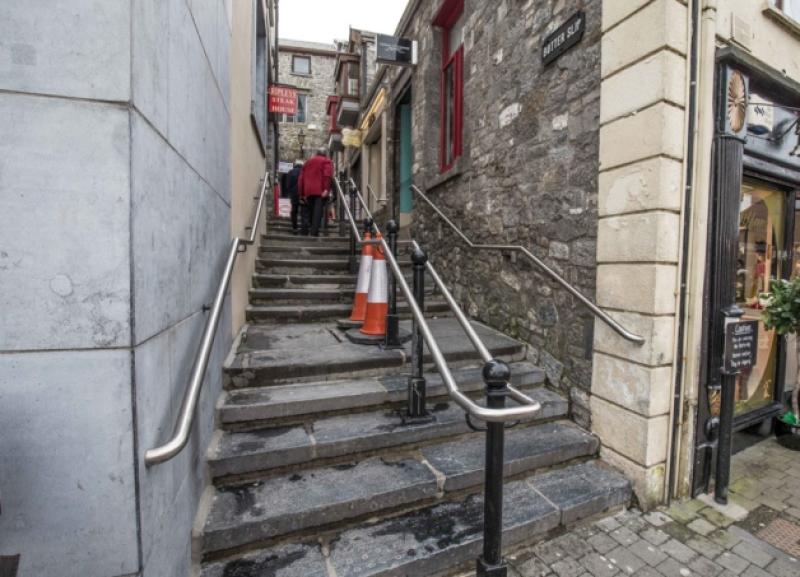 Long-term solutions are currently being considered for the Butterslip in Kilkenny, with a view to a full rehabilitation of the structure taking place next year.

Long-term solutions are currently being considered for the Butterslip in Kilkenny, with a view to a full rehabilitation of the structure taking place next year.

A number of possible works have been mooted to the famous Kilkenny lane, including turning the existing steps upside down, and putting in place a skid-resistant, reflective material. Renovations will include a removal of the new, temporary handrail on the lower portion of the slip.

At the February meeting of the Kilkenny City Municipal District, the members heard that there has been a very large number of accidents on the lower section of the slip. Both traders and members of the public have been making phone calls to the council about the problems it is presenting.

Senior engineer Kieran Fitzgerald revealed that the council has two public liability claims at present, and two other serious cases which have led to serious injuries.

“I am proposing that the Butterslip be attended to as a matter of urgency,” he said.

“It has got to the stage where we would not be doing our duty if something is not done,” he said.

A conservation engineer recently carried out a survey on the slip. He noted that people were experiencing difficulty in particular at the lower part.

“The steps are irregular, and no two steps are the same. It is very difficult for people with sight problems,” Mr Fitzgerald told the members.

“There is also an issue with visibility on the edge of steps, where people are unable to guage where one step ends and another begins.”

The council also must try to facilitate, where possible, the requests of accessibility groups. These groups favour a contrast in colour on things like rails and bollards, as two distinct colours aids the visually impaired.

As a long term solution, the conservation engineer has apparently suggested lifting the steps and replacing them upside down, because they are likely in perfect condition underneath. This would give uniformity in height. It is also suggested that each step be cut across, with a reflective, skid-resistant strip of material placed in the score.

Mr Fitzgerald has said that all such proposed works would come before the elected members for discussion. As the slip is a protected structure, any significant restorative works would involve a statutory process involving various assessments and a tender process.

It has also been noted that, as there are businesses operating both during the day and nighttime nearby, the slip would have to stay open as much as possible during the works.