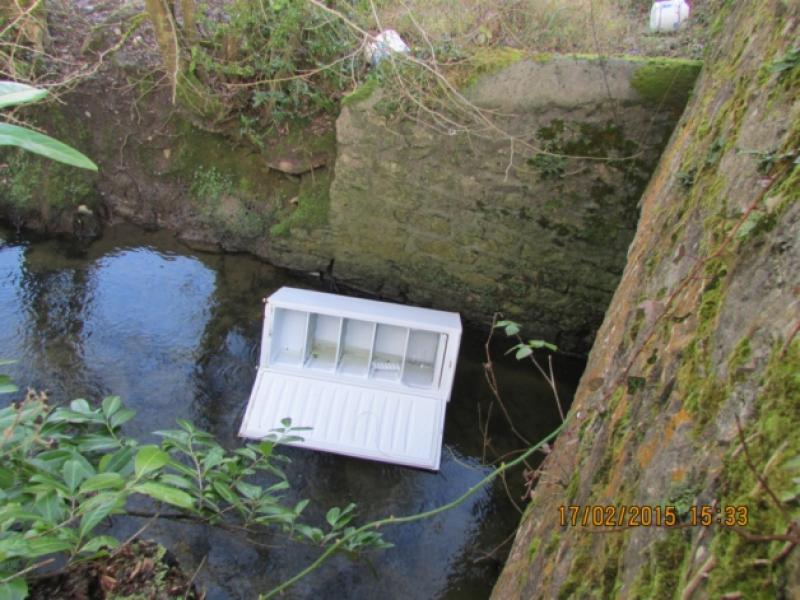 A group of cyclists recently came across an unusual sight after stopping at a small bridge near Callan to catch their breath.

A group of cyclists recently came across an unusual sight after stopping at a small bridge near Callan to catch their breath.

It seems that some thoughtless human being decided to toss a fridge freezer into the picturesque little stream, without a care for the damage the appliance could visit on the environment. A conscientious cyclist contacted the council’s environment section, and they were quickly out to remove it.

The council enforcement team noted that the offending item was unusually clean for something abandoned in this way, and therefore it is questionable if the owner knew of its final destination. The council has urged members of the public to only hire waste removers if they have a waste collection permit.

If you pay a person to remove waste from your house or business and the waste is later discovered illegally dumped, the person who created the waste remains responsible.

“What really astonished the enforcement team is the effort it must have taken the illegal dumper to throw the freezer down into the stream,” says Bernadette Moloney, environmental awareness officer.

“They took the time and effort to load it into a vehicle, drive it to a secluded area and lunge the freezer over the bridge. If it had been brought to Dunmore Recycling Centre or to a mobile collection day organised by WEEE Ireland, both alternatives would have been for free and there would have been assistance at both locations to unload it.”

WEEE Ireland completed five mobile collections in the county during February, and has just announced that they will be returning in March visiting Johnstown and Mullinavat this Saturday, and Castlecomer and Urlingford on March 14.

Addressing illegal dumping is one of the challenges identified in the draft Litter Management Plan which is currently on public display. It is available to view on www.kilkennycoco.ie, in all local libraries and at the environment section office in County Hall and the receipts office in City Hall. For more on the plan, see page 9.