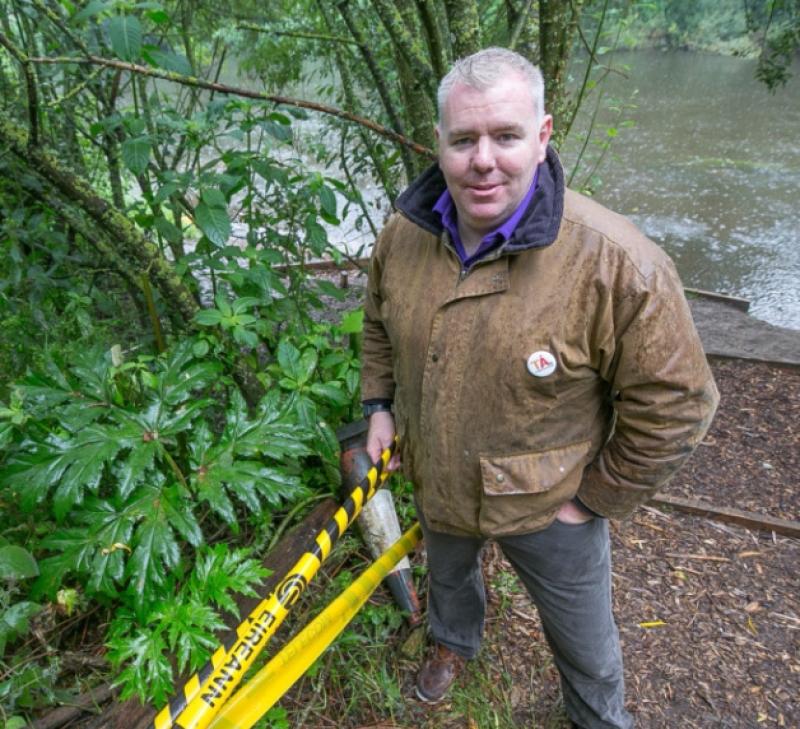 A hardworking team of volunteers have worked tirelessly in recent days in a bid to contain an outbreak of Giant Hogweed which can cause life-altering injuries when it comes it contact with humans.

A hardworking team of volunteers have worked tirelessly in recent days in a bid to contain an outbreak of Giant Hogweed which can cause life-altering injuries when it comes it contact with humans.

The plant can cause severe, long-lasting burns and blindness. It can also cause severe injuries in animals and dog owners should be extremely cautious and pay particular attention if their animal is on a lead close to the river bank.

There have been several reports of the plant growing both on the banks of the River Nore and the River Barrow.

Volunteers along with members of the sub group of Keep Kilkenny Beautiful - the Invasive Species Erradication Group are involved in organising the safe removal of the weed.

One man was injured while swimming last week at the Bleach Weir. He sustained a minor burn and is expected to recover fully.

Secretary of the Kilkenny Aqua Canoe Club, Adrian Shanahan explained that it is a very difficult process to kill the plant back.

“We have taken all the heads and blooms from the plants and have directed injected the stem where possible to kill it off. We have also geo-tagged where we think the seeds have fallen so we will be able to spray there in the Spring before the plant gets the chance to grow. It can take up to seven years to gestate so we need to be extra careful.

“The council has been very co-operative but there are limited with their resources. Hopefully they will be able to secure funding for us to help us erradicate the plant,” he said.

Mr Shanahan also pointed out that the giant weed - which is innocuous in appearance may put plans to develop the banks of the River Nore as an official Blueway Trail in jeopardy. The stretch of river is used for canoeing and paddling with walkers and cyclists making good use of the path that runs along the riverbank. Blueways Trail are an initative headed by Waterways Ireland which is centred on outdoor activity along the beautiful environs of the waterways of Ireland and is currently carrying out a feasibility study on the River Nore.

Meanwhile there have been numerous reports of the poisonous weed on the River Barrow and Kilkenny Water Safety have informed their lifeguards to be extremely vigilant.

“While many of our introduced species have a relatively benign impact on human health or the environment, giant hogweed is a real threat and can spread rapidly along riverbanks due to favourable growing conditions, spread of seed and the fact that the seed can remain dormant for up to 15 years.

“Management and control should be systematic and planned. Its presence in Kilkenny poses a real threat to the river Nore as a public amenity and it is vitally important that a plan is developed with all agencies and local groups to eradicate it. Otherwise large tracts of the riverbank will become no go areas,” he warned.