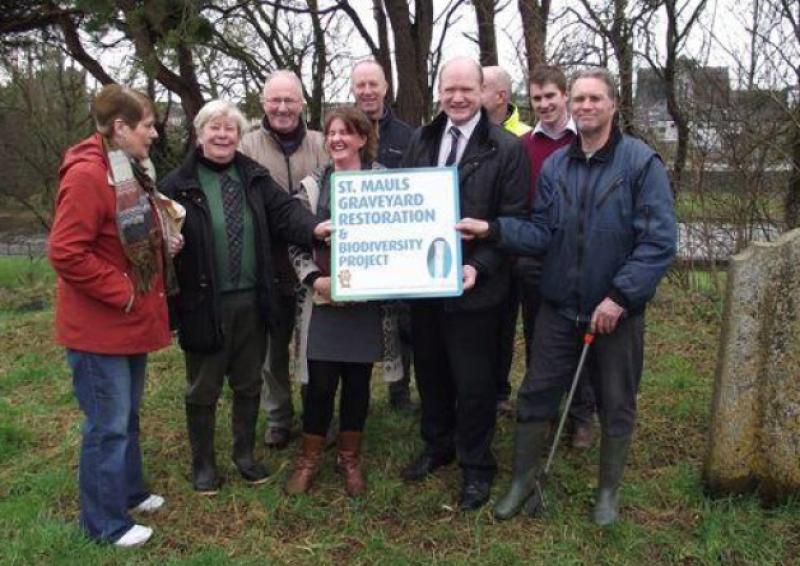 AFTER years of neglect, Kilkenny oldest graveyard, St Mauls is being carefully restored by the Keep Kilkenny Beautiful team.

AFTER years of neglect, Kilkenny oldest graveyard, St Mauls is being carefully restored by the Keep Kilkenny Beautiful team.

The idea to restore this important and historic site in the city stemmed from a meeting with residents of the adjoining estate at Bridgeview gardens.

Following this KKB Chairman David FitzGerald along with stalwarts Sean Leahy and Elaine Bradshaw sought the advice of Kilkenny County Councils Heritage officer Dearbhala Ledwidge, who applied for the necessary national monuments consents and KKB appointed landscape gardener, Stuart Day at the end of 2012 to begin the work of clearing the overgrowth.

Stuart has undertaken tremendous work to uncover previously unseen gravestones and markers to reveal the significance of St Mauls.

Following advice from National Parks Ranger Jimi Conroy and Claire Goodwin from Kilkenny County Councils Parks department, KKB are following a restoration programme that follows best practice to support the wildlife and habitats while respecting those buried in St Mauls.

Reputed to be the site on which St Canice’s mother set up her home, the ancient plot has been used as a graveyard from before the Norman times. The graveyard has been a place of repose over many centuries by various communities with the largest number of burials dating from the famine period as St Mauls was used as the workhouse graveyard.

Unlike other graveyards, St Mauls has surprisingly few headstones with many of the plots identified with rough stone markers. The graveyard has been overgrown for decades with no public access allowed as the discrete entrance gate was permanently locked.

When work is completed KKB hope to open the graveyard to the public for limited periods over the summer months.