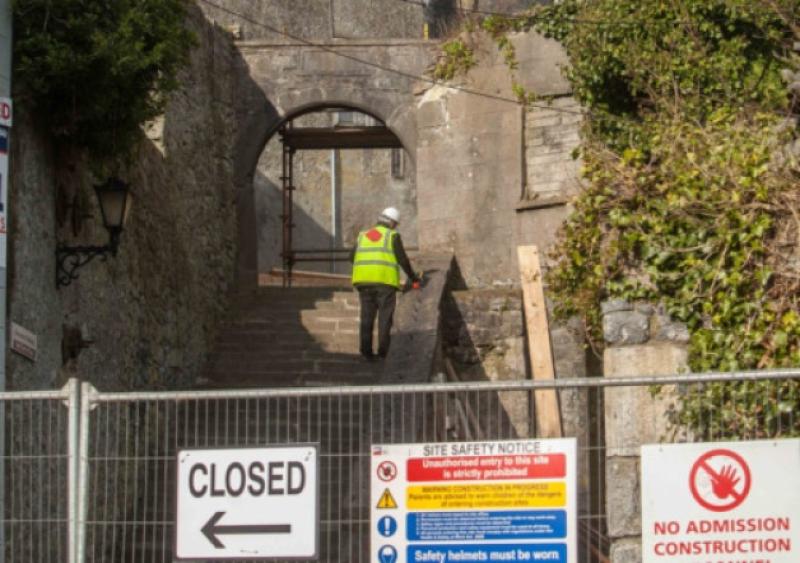 VITAL repair work has begun on one of the city’s most well-known historical features – St Canice’s steps and arch – with the area currently closed off to the public.

VITAL repair work has begun on one of the city’s most well-known historical features – St Canice’s steps and arch – with the area currently closed off to the public.

The steps and arch leading from Irishtown up to St Canice’s Cathedral had been subsiding considerably in recent years, with large cracks and fissures appearing in the stonework and cement patching. It appears that a pipe beneath the strucure is broken and the lack of drainage is causing structural problems.

The council had previously said that the steps were structurally sound, and carried out rudimentary cement patching. But it has now been accepted that there is a significantly larger problem at hand.

“What is happening is that there is a drainage pipe fracture and so the filling under the steps has leached away,” said senior engineer for the borough council Kieran Fitzgerald.

“We have to lift the steps that have deformed, replace the pipe, put back in the filling and reset the arch.”

Local man Johnny Cleary, from nearby Connolly Street, has been a vocal campaigner for the restoration work for years now. He passes under the arch and down the steps everyday, and had made routine representations to the local authorities for works to be undertaken.

“They’re finally doing something about it,” said Mr Cleary.

“It’s time something was done because it was getting worse.”

The steps, an instantly-recognisable feature of the oldest part of the city, are constructed from locally-quarried cut limestone. They have been there since 1614, when they were built by Robert Wale.