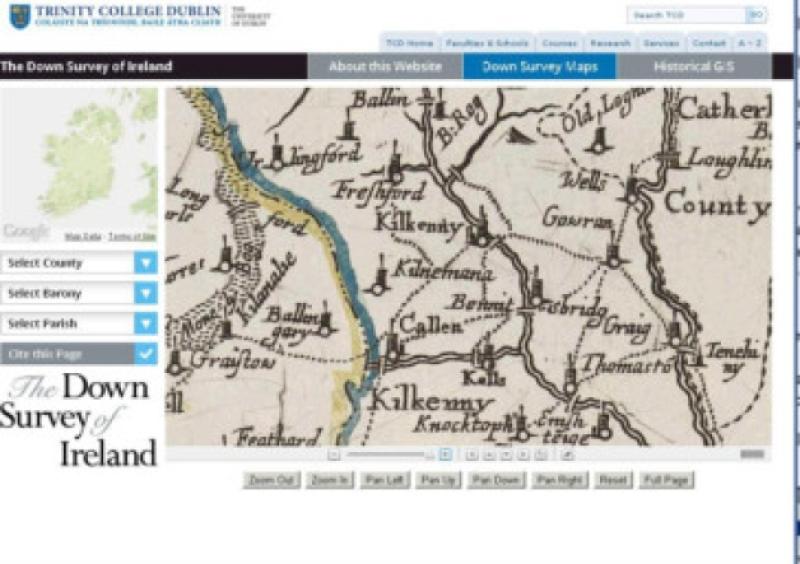 Ever wondered what Kilkenny looked like in the 17th Century – who owned what land in what parish, how it might have changed hands before and after Oliver Cromwell’s invasion?

Ever wondered what Kilkenny looked like in the 17th Century – who owned what land in what parish, how it might have changed hands before and after Oliver Cromwell’s invasion?

An innovative new web resource could revolutionise the way we understand Irish and local history, by combining 17th Century maps with the latest technology including satellite imagery and Google Maps.

Made in the years 1656-1658, the Down Survey of Ireland was the first ever detailed land survey on a national scale anywhere in the world. Its purpose was to measure all the land to be transferred from the Catholic Irish to English settlers, implemented by Oliver Cromwell.

It reveals an interesting before-and-after of demographic spread in Kilkenny both pre and post-Cromwell. For example, in 1641 – almost a decade before Cromwell – 57.7% of the county’s land is owned by Protestants, while Catholics account for 34.3%. But by 1670, Protestants hold slightly more than 70% of the land, with Catholics claiming a mere 11.4%.

It also shows some interesting details about hundreds of local families – a resource which could prove useful to anyone researching their own family’s history. Site visitors are able to search a database of thousands of landowners across the country, what they owned and where.

For example, the dossier of landowners in the parish of St John’s in Kilkeny City reveals over 80 landowners. To focus in further still, one man – a Patrick Murphy – is shown as owning 14 acres.

One section of the website shows digital images of all the surviving Down Survey maps at parish, barony and county level. The written descriptions (terrier) that accompanied the original maps have also been included. So, for example, Kilkenny City’s reads:

“The soyle is generally good arrable meadow and pasture and containes these parrishes following vizt: Canice, StPatrickes and St Johns. The metropolitan inland citty of this Island is scittuated in the midst through which turns a pleasant and profitable river called the Neor which takes its rise out of the mountainous part of the County of Tipperary.”

The Down Survey project was led by a Trinity College professor called Micheál Ó’Siochrú, who with his team located over 2,000 copies of the original maps from across Europe. He says that the resource has the potential to change our understanding of Ireland in the 17th Century, most notably, our understanding of the ‘scale and timing’ of the land transfers from the indigenous population to the English settlers.