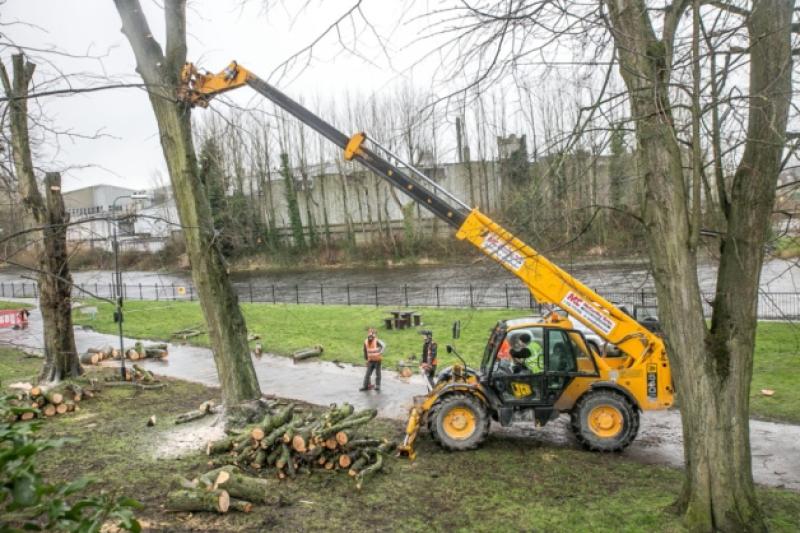 Kilkenny’s local authorities have claimed that the felling of trees in the centre of the city, which had been earmarked for removal to facilitate the construction of a new bridge, suffered some damage as a result of recent storms and after inspection had to be cut down.

Kilkenny’s local authorities have claimed that the felling of trees in the centre of the city, which had been earmarked for removal to facilitate the construction of a new bridge, suffered some damage as a result of recent storms and after inspection had to be cut down.

Cllr Malcolm Noonan said that he was puzzled and saddened at the loss of the trees particularly given the fact that no decision has been made regarding the status of the houses at Vicar Street which are on the route of the planned Central Access Scheme (CAS) and the new bridge. The houses are due for demolition but questions remains over their importance in heritage terms.

An Taisce Kilkenny said it was outraged at the felling of the “beautiful mature trees” in the Peace Park by the River Nore and directly opposite the city’s brewery.

“The CAS has not yet cleared all planning hurdles as the issue of the medieval fabric in the Vicar Street houses has not yet been finalised,” a statement from its chairman, Declan Murphy said.

Kilkenny County Council told members that four new semi mature trees by way of compensatory planting will be provided in the vicinity. “In addition the works to be carried out under the riverside garden project will further mitigate the loss of the trees and enhance significantly the peace park area and the riverside landscape on the bank opposite at Diageo,” the statement said.

Cllr Noonan, a staunch anti-CAS campaigner said the rationale behind the felling was puzzling to many people. “It has also happened on the morning when I received correspondence from Minister for the Arts, Heritage and the Gaeltacht Jimmy Deenihan that ‘a determination remains to be made on whether the structures at Nos 20-22 Vicar St constitute a national monument for the purposes of the National Monument’s Act’.

“The Council should not proceed with any works related to the CAS until such a time as direction comes from the Minister to proceed. This has been further highlighted to the European Commission Environment Committee by Sway of petition submitted by Shirley O’Brien and myself and that Irish Authorities were made aware of this fact in October 2013,” said Cllr Noonan said.

“While the local authority has stated that it intends to mitigate against the loss of the trees by planting semi mature trees, I believe it cannot undo the destruction of the Peace Park in this manner. This is an area that is held in great affection by people in Kilkenny and it’s peace is about to be shattered by the construction of a busy, noisy and unnecessary thoroughfare’ he said. ‘All further works relating to the Central Access Scheme (CAS) should cease immediately pending the outcome of assessment of the Archaeological Report for Vicar Street,” Cllr Noonan requested.