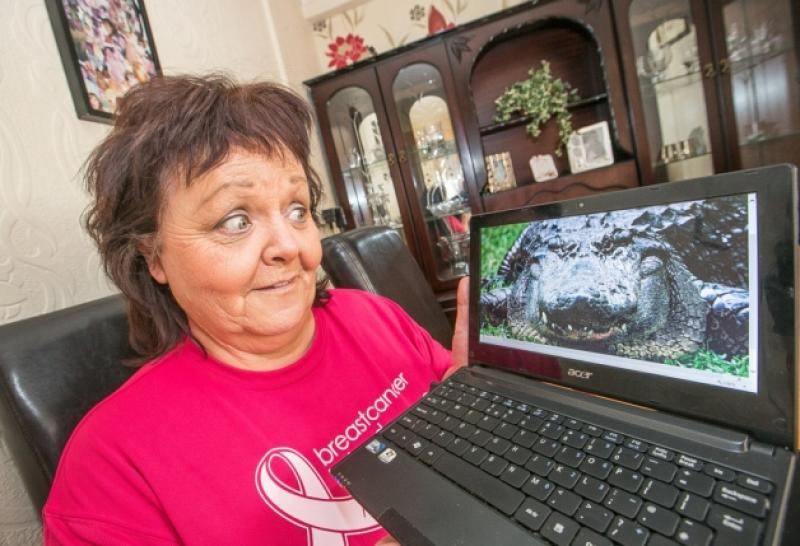 A mother who will swim with American alligators later this month is committed to raising money and awareness for breast cancer.

A mother who will swim with American alligators later this month is committed to raising money and awareness for breast cancer.

Josephine Fitzgerald is the mother to 35-year-old Cathy who is currently battling cancer. Cathy was diagnosed with breast cancer six years ago and after four and a half years in remission finds herself fighting cancer for the second time.

“I don’t think I am the brave one, those fighting cancer are. I know no fear when it comes to helping my child,” she said.

The idea for the novel fundraiser stemmed from a story Jospehine read in the Kilkenny People where the Reptile Village in Gowran were looking for volunteers to swim with their two American alligators - CC and Battle.

“I had done other bits and pieces to raise awareness. Last October a group of us walked to the top of Sliabh na mBan and we released pink balloons. I have a permit to fundraise on behalf of Breast Cancer Ireland and as long as I have breath in my body I am going to do my best to promote awareness and raise money for research. After the alligators though I will be keeping my feet on dry land,” she said.

Cathy who is a mother to Daniel (13) and Andrew (2) has a strong, positive outlook in life.

“She is an inspiration - her courage and bravery know no bounds. I have never heard her once complain in the past six years, she is my heartbeat,” Josephine said.

“I don’t think that I am the brave one, those fighting cancer are. I know no fear when it comes to helping my child. Cathy is the wind beneath my wings, she carries me,” she said.

Josephine knows James Hennessy who runs the Reptile Zoo in Gowran all his life.

“James is originally from Callan. When was a baby I remember going over to the pram to admire him. I know him all his life. Now he is bringing me into a pond with two man eating alligators. I am literally putting my life in his hands,” she said.

The giant reptiles are acoording to James apparently quite docile in very cold water and are generally timid towards humans and try to avoid them when approached but when they feel under threat are capable of killing. If you would like to donate see www.reptilevillage.net