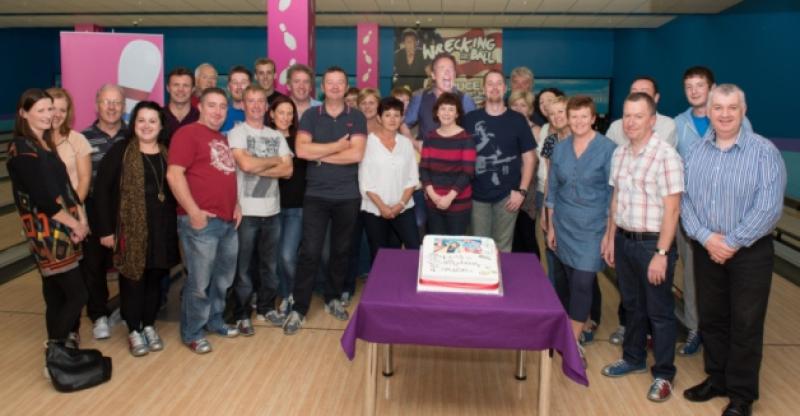 Just two months after Bruce Springsteen came to town, his birthday was marked locally with a special party.

Just two months after Bruce Springsteen came to town, his birthday was marked locally with a special party.

KBowl at MacDonagh Junction hosted a private bowling party for the Boss and his crew when he first hit Kilkenny in July ahead of his two days of concerts at Nowlan Park. Last week, a group of invited guests were asked to mark his 64th year on earth at a special event which doubled as the official launch of Springsteen Alley and display.

Those who gathered for the night were treated to complimentary bowling, finger food, drinks and stunning cake from Quigley’s at MacDonagh Juncion while a Bruce concert playing out on TVs around the venue provided the night’s soundtrack.

A quizsheet was handed to all who entered, boasting ten tough questions on the star. Tom Brennan from Gowran had the top score of nine to win while the Strike competition on the alley was won by Michael Brennan and Kevin Hanrahan who got for their skill an hours bowling for six people.

While many perceive the pastime to be one for kids, the event proved that adults can get just as much fun out of hurtling a ball towards ten pins. It’s become popular with people of all ages bowling with groups of friends or gathering for their own bowling party.

Owner Shane Murphy was on hand to greet those present, while staff told of what it was like to work at KBowl on the night the Boss paid a visit (seemingly he was lovely, especially to the staff!)

They’ll be just as nice to you if you stop by, and don’t forget to have a go on Springsteen Alley!