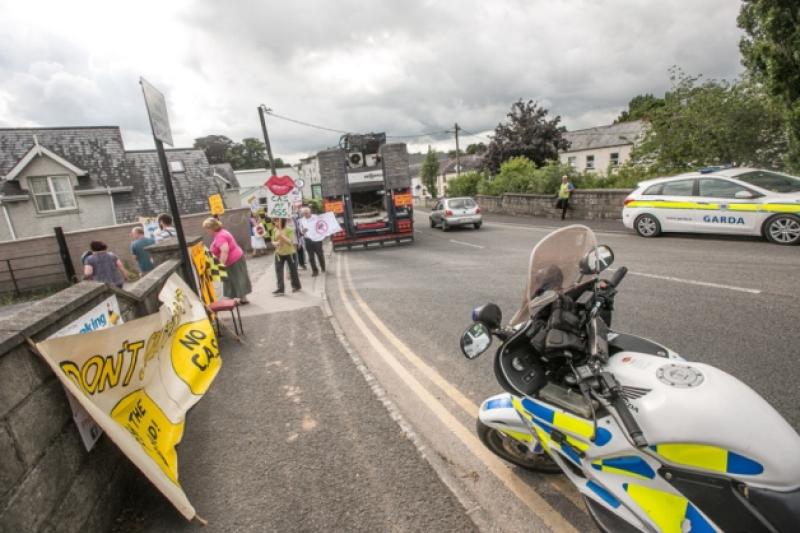 Anti-CAS protesters have managed to prevent a large HGV from entering the construction site of the new bridge in Kilkenny City this afternoon.

Anti-CAS protesters have managed to prevent a large HGV from entering the construction site of the new bridge in Kilkenny City this afternoon.

Traffic was brought to a go-slow for around an hour as the truck, which was transporting large piledriving equipment, came to a halt just outside the entrance off Greensbridge. Around 20 protesters refused to move aside to allow it access.

The equipment on board the truck is needed to install the bridge foundation piles into the river bedrock. The new bridge is to have a number of columns within the river.

Several Gardai were called to the scene, and a one-way system had to be implemented to enable the flow of traffic. The truck left the scene just after 5.30pm.

Work continued today on the other side of the river, with earth-moving machinery digging up the Peace Park, which was largely closed off to the public.

A meeting was due to take place tomorrow (Friday) between members of the county council and the anti-CAS group, but the anti-CAS group have since withdrawn from it. They say that the format of the meeting was not what they had requested, as it was in-committee and would lack the documentary record of a standard meeting.

They want to make a presentation to the council meeting proper, which takes place on Monday. The group is also unhappy with the fact that the meeting was scheduled for a time after work had already begun on the new bridge.